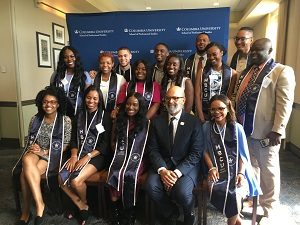 Lomax and the others were among about 150 people who recognized the second-ever group of young people to graduate from the Columbia HBCU Fellowship, a program that brings in 20 undergraduate seniors from Historically Black Colleges and Universities, awards them graduate degrees and teaches them how to navigate in corporate and working culture. The program allows the young people to take classes on the Ivy League campus, work with organizations in New York, where Columbia is located, and receive industry mentoring.

Lomax told the group that the Columbia HBCU Fellowship is valuable because HBCU students already arrive on campus academically on par and with a healthy sense of self, but also learn from the program how to move in circles where others might shun them or not immediately recognize their value. Lomax shared his own experience of arriving on the Columbia campus in 1968 with an undergraduate degree from Morehouse and plans to earn masters and doctoral degrees in English literature at Columbia. But his time there, which included difficulty finding housing, ended prematurely when he opted not to return after serving in Vietnam.

“When I got to Columbia, nobody knew about Morehouse or seemed to care,” he said, even though he’d been number two in his class at the HBCU in Atlanta.

He worried about being good enough until he saw his grades were as good or better than classmates who’d come from the Ivies, he said.

“My experience at Columbia was a rich one academically, but honestly, it was an isolating one socially, so much so that I did not return, but instead pursued my Ph.D. after the war ended at Emory University,” Lomax said, adding that the Columbia HBCU program fills a necessary gap.

“It is the kind of program that, had it existed 50 years ago, might have influenced the university … to embrace, to nurture and to welcome Black students,” he said.

Lomax also made reference to the national buzz that emerged on Sunday, when billionaire Robert F. Smith announced at the Morehouse College commencement that he was paying off the student loans of the 2019 graduates. Lomax said Smith’s act is significant not just for the financial impact, but also because his presence and success helped ingrain into the HBCU students that “they are enough” and because he “liberated” the students to pay it forward.

Others also told the fellows that their existence and the space that they occupy is unique and they will need to learn to navigate.

Dr. Jason Wingard, creator of the fellowship and former chief learning officer at Goldman Sachs, told the fellows that it is important to be prepared when opportunity comes their way.

“Success is when opportunity meets preparation, so that’s why you always want to be prepared,” Wingard, dean of Columbia’s School of Professional Studies, told the room at Columbia’s Faculty House.

He said the intention of the program is for students who come from schools like Florida A&M University, Howard University and Delaware State University is to learn how to network, begin building professional networks, understand the importance of giving back and learn how to keep going in the face of adversity or negative people.

“People won’t expect you to do well,” Wingard told the students. “Always be ready anyway,” he said.

The program pulls in the top HBCU students, who receive tuition, housing and master’s degrees from Columbia, but Columbia gains from their presence too, said Dr. Tatum Thomas, Columbia’s senior associate dean of student affairs.

Fellows said the experience was invaluable in terms of nurturing relationships not only among themselves but within their respective career industries.

The fellowship was “a big change” from her undergraduate experience at Delaware State University, said fellow Leisha Cason, 22, of Amityville, N.Y.

Cason plans a career in nonprofit management and has been working, through the fellowship, with GiGi’s Playhouse, a nonprofit that focuses on people affected by Down’s Syndrome.

Fellow Sharon Eady, 23, of Middletown, Del., said the program has offered an unforgettable experience. Like Cason, Eady also went to Delaware State and wants to pursue a career in nonprofit management.

“I feel like we’ve become a family,” Eady said.