Catholic colleges and universities have long promoted principles of social justice, inclusion, compassion and dialogue, even in the face of fierce protest.

There are certainly winds of change impacting Catholic colleges and universities across the nation.

Loyola University New Orleans, for example, has its first-ever layperson president who also happens to be a woman. While Tania Tetlow, an attorney and law professor, brings a fresh perspective to institutional leadership, she says espousing the fundamental mission of Jesuit education promotes much-needed tolerance, acceptance and advocacy. “This is a moment in our world’s history when the pace of technology is outstripping the careful consideration of ethics; a moment when we’re cleaving into tribes; when the voices of conspiracy and polemic have drowned out the search for truth,” says Tetlow, who is completing her first year on the job. “At the core of Jesuit Catholic education is the mission of teaching our students how to question assumptions and to push on systems to make them more just. If you were to design an antidote to the ways the world seems to be falling apart… it would be a place that teaches students the wisdom and perspectives of many disciplines so they can solve the toughest problems.”

Fordham University is a private, competitive Jesuit research university. Its two New York City campuses (Manhattan and the Bronx) strive for excellence in research and teaching and, according to its mission, guarantee the freedom of inquiry required by rigorous thinking and the quest for truth.

Dr. Michael C. McCarthy, vice president and presidential assistant for planning, works in the office of mission integration and planning. Part of his job involves explaining what is distinctive about a Jesuit Catholic university and helping faculty, students and staff understand how they can contribute to the university’s overall mission.

“We try to encourage and promote social justice as part of our mission identity,” says McCarthy, who is also a Catholic priest of the Jesuit order.

Two large-scale issues that are priorities at Fordham are racism and immigration. On a local level, the student body is quite concerned with housing and gentrification, particularly in the Bronx. McCarthy says the campus community is becoming increasingly sensitive to LGBTQ issues, much to the displeasure of some Catholic groups that operate outside the university.

For example, a few months ago, a drag fashion show planned on the Bronx campus through student affairs was besieged with criticism from outside groups and individuals — mostly on social media — who argued that such an event should not take place on the campus of a Catholic university. University officials stood firmly with the students.

A statement issued by senior administration noted: “Fordham’s first drag fashion show and its participants have been the subject of cruel and dehumanizing statements by outside organizations. Those statements neither reflect a spirit of care, nor are they consistent with the kind of discourse we promote at a Jesuit, Catholic university. … The University’s position is that part of Cura Personalis (care for the entire person) is honoring the individuality of all our students, regardless of their race, religion, sexual orientation or gender identity.”

McCarthy says care for the environment is deeply rooted in Catholic values. That is both literal — clean air, water and soil — and figurative — a concern for the world in which we live. That has caused Fordham to take a strong stand on immigration issues. Earlier this year, McCarthy took a group of faculty members to the Mexican border at Nogales, Arizona and Nogales, Sonora, Mexico. He plans to bring students on future trips.

“The Catholic Church has been very forceful in calling for comprehensive immigration reform,” McCarthy says. “The promotion of justice is an essential part of the service of faith.”

Pursuit of justice is reflected in the curriculum, which includes courses on homelessness, the Black prison experience, mass incarceration and poverty. There is a course in the theology department that explores the Bible and social justice. Fordham University School of Law has the Feerick Center for Social Justice. Still, McCarthy says there is more to be done.

“We realize we need to be more coordinated in our efforts at community-engaged learning,” says McCarthy. “We are growing in that. There are individual research projects that we are trying to advance to connect faculty members and their students with housing projects in the South Bronx.”

Dr. Michelle Loris, professor and chair of Catholic Studies and associate dean of curriculum and special projects at Sacred Heart University (SHU) College of Arts and Sciences in Connecticut, says nearly 90 percent of the incoming freshman class identified social justice and service learning as something about which they are passionate.

“The job of education is to enlighten, educate, bring awareness and inspire,” says Loris. “The job in the classroom is to lead them out of the darkness into awareness, and awareness, knowledge and understanding hopefully lead to action.”

Sacred Heart University president Dr. John Petillo has led SHU’s efforts to bring outspoken Catholic intellectuals to campus, such as Fr. James Martin, author of Building a Bridge: How the Catholic Church and the LGBT Community Can Enter into a Relationship of Respect, Compassion, and Sensitivity. Loris says there was an outcry from conservative Catholics over Martin’s presence on campus, but that largely came from individuals outside SHU.

Catholic Intellectual Tradition includes the principles of human inquiry, human formation and divine revelation. It pulls from diverse elements in finding ways to respond to the context and situation within which one is living, working, teaching and learning.

In response to violence and hate rhetoric in the news, Petillo asked Loris to develop a discussion series that explored the roots of hate and violence as well as possible solutions. The series, “Heart Challenges Hate,” took place during the spring semester with panelists discussing everything from the psychology and rhetoric of hate to the First Amendment and whether religion is a contributor to or remedy for violence and hatred.

“A Catholic university … is critically responsible to respond to a culture of hatred, bigotry and violence with knowledge, [reasoned] dialogue and faith,” says Loris. “We have a critical role to play in sustaining a democratic society in which we maintain the open flow of ideas, the rule of law, the acceptance of diversity, and most especially respect for human dignity and common good.”

Sacred Heart has also been aggressive in addressing issues within the Catholic Church. The university hosted a colloquium on the sexual abuse crisis in the Catholic Church and created the online forum Go, Rebuild My House, which includes blogs with opinions about the transformative changes needed in the church.

Like Sacred Heart, Georgetown University — the nation’s oldest Catholic university — has also been grappling with social issues, including its dark legacy of slavery. In April, students overwhelmingly voted in favor of a fee to benefit descendants of enslaved people.

St. Francis College in Brooklyn, New York was founded 160 years ago to serve working class families as well as immigrant communities. The college’s Franciscan values of community service, truth, understanding and excellence in academic disciplines are still at the forefront of its mission. 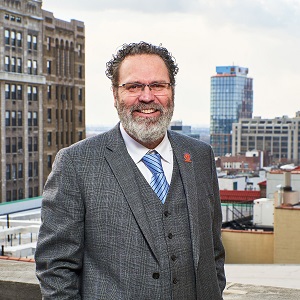 The college’s president, Dr. Miguel Martinez-Saenz, says the Franciscan notion of hospitality is reflected in how accessible the college is to immigrant communities and how open it is to interfaith dialogue and presence on campus, such as a Muslim prayer room.

“Because we are rooted in a Catholic tradition and Franciscan values, we open our doors,” he says. “It’s a critical view in terms of mission. We are really keen on promoting notions of hospitality.”

The college has a prison re-entry program, in which formerly incarcerated individuals who show academic promise — both with and without college credits earned while incarcerated — receive scholarships to attend St. Francis and earn their degrees. Dr. Emily Horowitz, professor of sociology and criminal justice, heads the program.

“Because it’s a Franciscan school and it’s consistent with the Franciscan mission to help, forgive and let people redeem themselves, it’s a really great place for them,” says Horowitz.

The only topics Martinez-Saenz, who became president of St. Francis in 2017, says he does not speak about are abortion and women’s reproductive rights. On everything else, he is quite vocal, using scripture as a framework for his decisive opinions.

“Issues of racial disparity and discrimination, I just come out and say it’s wrong,” says Martinez-Saenz. “I can actually push a more serious justice agenda here than I can in a state school environment. In a state environment the agenda is politicized. Since I make it about our fundamental values, it’s not politicized. People don’t see me as making a political statement because I frame it in the context of the church’s values.”

When Martinez-Saenz speaks to the college’s conservative older alumni about the post-prison program, he does so in the context of biblical verse, which he says takes criticism off the table. It allows him to talk about social justice issues more forcefully.

“I can’t have it all, but no leader has it all,” he says. “I feel freer to talk about systemic inequality, systemic racism from this space than I have at probably any other college. It allows us to call people to recognize that they have espoused values that they need to enact.”

This article appears in the May 30, 2019 edition of Diverse.