Dr. Lonnie G. Bunch III has been appointed secretary of the Smithsonian Institution, making him the first African American leader in the Smithsonian’s 173-year history. 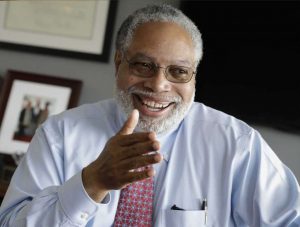 Bunch, the founding director of the Smithsonian’s National Museum of African American History and Culture, succeeds David Skorton, who will step down on June 15. The new secretary will start June 16 and is tasked with overseeing the Smithsonian’s $1.5 billion annual budget, 19 museums, nine research centers and the National Zoo, the Washington Post reported.

“I have such a profound love of the Smithsonian,” Bunch told the Washington Post. “I want to help the world see the Smithsonian as I do, as a place that matters, with gifted people who just want to serve their country.”

The Smithsonian’s Board of Regents approved Bunch’s nomination as secretary Tuesday morning. Members acknowledged his previous museum leadership experiences, his standing among colleagues and his fundraising successes over the years. Notably, Bunch secured $270 million in federal money and $317 million from private donors by the time the NMAAHC opened in 2016, the Post reported.