For years, there has been continuous conversation surrounding the scarcity of Black male professionals working in higher education. Often the narrative related to the cause of the shortage refers to the low number of Black males who attain a college degree. Data indicates that approximately 409,000 Black males in the United States hold at least a Master’s Degree and approximately 88,000 Black males have earned a Doctoral degree. Further disaggregation of this data indicated that only 3 percent of Black males hold positions as a faculty member in higher education (Turner & Grauerholtz, 2017). Data is harder to obtain and disaggregate when studying the number of Blacks professionals outside of the role of faculty in post-secondary education. Only 13 percent of post-secondary administrators are Black (men or women combined) and 34 percent are Black men (Bureau of Labor Statistics, 2015; Turner & Grauerholtz, 2017). Furthermore, more than 70 percent of college presidents are men and 80 percent are White men (Gagliardi, Espinosa, Turk, & Taylor, 2017). If there are large numbers of Black men who have attained a graduate degree, why is there a shortage of Black males serving as faculty and administrators at universities and colleges in the United States? I would like to address this question from a personal narrative.

After working as a corporate professional for nearly 15 years (making a sizable 6-figure salary) and serving as an adjunct faculty member for nearly 10 years, in 2013, I made the decision to return to school to earn a doctoral degree. I decided that I wanted to use my workforce experience and love for teaching adult learners to reach more students. 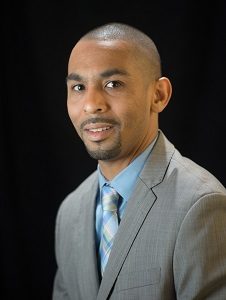 Most of my experience working at post-secondary institutions had and has been at predominately Black institutions (PBIs) and Hispanic Serving Institutions (HSIs); colleges and universities that serve large numbers of Black and Hispanic students that do not have equal representation of Black male faculty, staff and administration.  I was so engaged and intrigued by my experience working at PBIs and HSIs that I focused my dissertation study on Experiences of Successful Black Males at Hispanic Serving Community Colleges. I was surprised to learn that more Black males were enrolled in Hispanic Serving Institution’s than that of PBIs and HBCUs combined (Knox, 2017), yet there are scarce numbers of Black male faculty, staff and administrators leading these institutions and guiding the academic success of students.

While enrolled in my doctoral program, I started applying for full-time administrative roles in higher education and as of today, I have applied for more than 150 administrative jobs. When I look back at the number of completed and submitted applications, I am appreciative of the internet and online employment applications, as I would have spent a fortune on mailing out resumes and cover letters. The job titles in which I have applied have ranged from program director to college Provost. Of the 150 completed applications, I have interviewed less than 20 times and have only been offered 1 full-time job.

After I earned my doctorate degree, was given an opportunity to work as a part-time higher education administrator, and was on my way to obtaining a professional position in post-secondary education, or so I thought. In my mind, I was 1 of 88,000 Black males who held a doctoral degree and there was a shortage of us.

On several occasions I have either known someone professionally who was a member of a search committee for a job that I have interviewed for or have followed up with the chair of the search committee for feedback. The feedback I have received has always positive with caveats. Prior to earning my doctorate degree, I received feedback that I needed to complete the degree. When applying for a Dean/Vice President position, I heard that I had not gone through the “traditional” route of higher education. When I applied for a Director position, I received feedback that I had too much experience and probably would not stay. And when I applied for a Provost position, I made it the final four and was asked “are you sure that you want to apply for this position, you have interviewed as if you were a presidential candidate”. The feedback received has never been that I did not interview well nor concerns of my abilities and skillsets. While I have appreciated each and every person who has been nice enough to provide me with feedback at the conclusion of a search, there are more Black men who have similar educational attainments and professional experiences, such as myself, who are overlooked for administrative roles at post-secondary institutions.

Periodically, I will return to my hard drive and look at the websites of the colleges where I applied. The majority of the positions that I have applied for have either been filled by the interim already in the position or someone who worked at the college. I know that nepotism and cronyism exists and that there are hiring guidelines established especially for public institutions; however, what about the person who goes through the process? They often have to complete a long online application, write a cover letter specific to the college and position, attach a resume and update a list of references. The process often can take upward of several hours even when using a template for the application package. Once the application is submitted, there are often at least three separate interviews that a candidate must participate in which often times incurs travel costs and time off from work. I’m sure that many job seekers will agree with me by indicating an appreciation for colleges and universities who have an internal application process prior to accepting applications from the general public. Why spend time, money and resources conducting a search when the best candidate is already at the institution?

Currently, I personally know of at least five Black males who have continuously sought out administrative roles at post-secondary institutions for more than two years and have not be offered a job. They are Black men who have attained a doctoral degree, who do not have criminal records, who have a strong passion for student success and are willing to relocate and work with underrepresented students in urban areas. These educated Black men have participated in appropriate professional development opportunities (often paying out of pocket), written scholarly articles, presented at local and national conferences, yet cannot obtain a job working in higher education administration.