On the heels of a resolution passed by the alumni council calling on Western Illinois University president Dr. Jack Thomas to resign by June 30 – or be kicked out by trustees – some school employees say he is performing well in the face of tough economic and geographic realities.

“It’s not any one person’s fault, but the leader gets blamed,” said Dr. Rick Hardy, a political science professor and dean of WIU’s Centennial Honors College. “I think our leadership should get credit for keeping this institution open and thriving.” 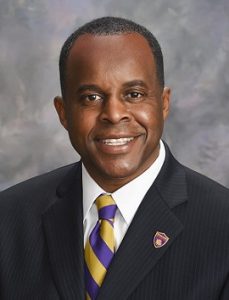 Most of the alumni council’s 15 members have a different view. By a vote of 15-2 in a special session June 6, the council adopted a resolution insisting that Thomas step down by the end of this month and that the university’s board of trustees terminate his contract should he not do so.

The document, signed by council president John Sanders and made public Monday, demanded other measures, including ramping up efforts to increase enrollment, cutting least-popular academic programs and establishing “tangible metrics” to gauge the effectiveness of changes.

The recommended changes are urgent, according to the resolution, because WIU “has been severely impacted in recent years by declining enrollment, funding shortfalls, arduous negotiations with collective bargaining units and the departure of several senior leaders.”

It further contended that “action has been far too slow and indecisive in addressing ongoing issues” and that “no clear plan of action or evidence of a shared vision” across the university community’s stakeholders “has been presented or appears to be imminent, suggesting a lack of direction and floundering leadership.”

Darcie Shinberger, WIU’s assistant vice president of advancement and public services, said Thomas was unavailable for comment Wednesday, adding that the university does not comment on personnel matters.

Hardy, however, begged to differ with the council’s assessment. He suggested that demands for Thomas’ departure ignore or fail to appreciate historical context and Thomas’ leadership addressing geographic and economic challenges that predated his arrival in July 2011.

Hardy, a WIU alumnus, cited “a convergence of many factors” that help explain WIU’s long-term decline in enrollment and current fiscal challenges: population decline in the Macomb region, resulting legislative reapportionment, state disinvestment and financial distress, decrease in the number of traditional college-age students, and stiff competition from community colleges and online education.

As a result, a regional state school with upwards of 14,000 students, overwhelmingly rural, gradually has become smaller and less rural since the 1960s, Hardy said.

According to the College Scorecard, WIU currently has about 7,600 students.

“We just have fewer students to draw from in this region,” said Hardy. “And blaming one person defies logic.”

Adding to the angst – and anger misdirected at Thomas – are the departure of retail businesses and other factors outside of the university’s control that have negatively impacted the Macomb community.

Hardy credited Thomas with efforts to expand enrollment by more recruiting in Chicago and other large cities, at the same time diversifying faculty, making tough choices about staff cuts to address issues of financial viability, creating action teams and a steering committee to move the university ahead.

During Thomas’ tenure, Hardy noted, the honors college has doubled in enrollment, average standardized test scores have increased and more students are winning prestigious fellowships and scholarships such as Fulbright and Goldwater.

“So there’s still a lot to be proud of,” said Hardy.

But not everyone is pleased. And, truth be told, Hardy said, some are unhappy with the steady browning of the student body.

“Unfortunately, what the institution is going through gets magnified because of race,” he said. “That’s something that bothers me. It bothers a lot of people.”

Williams, who is African-American, said he is “at wit’s end” with “racial hatred” on campus and in the wider community directed at students and faculty of color and at Thomas, who is Black and the university’s first president of color.

Racism and bigotry that were “relatively latent” when he came to WIU more than a decade ago have gradually worsened, he said, and are so bad now that students, prospective students and their parents have been contacting him with concerns about the climate there.

“We have this nasty undercurrent that just really tries to undermine everything we try to do,” said Williams, who was brought to campus in a diversity officer-style role by Thomas when he was the provost. “These folk are yelling, ‘We want our White town back and you all need to hit the road.’”

It’s not that direct, Williams said, but it’s the distinct message sent by many in routine comments and actions. He agreed with Hardy’s assessment of the demographic and economic trends that bedevil the university, adding that racial hostility compounds the problem.

And it’s particularly evident among some older “retiree” White employees who prop up institutional racism and can barely disguise their disdain for staff and students of color, he said.

“How do you get a fair shake when you’re in this kind of environment?” Williams asked.

He said he has heard from Black and White alumni who disagreed with the council’s resolution and questioned how the council could purport to speak for the more than 135,000 alumni when there was no apparent effort to canvass them.