Dr. Diana Natalicio: A Champion for Access and Excellence in Public Higher Education

As a first-generation student at Saint Louis University, Dr. Diana Natalicio, the long-serving president of the University of Texas at El Paso (UTEP), initially set out to teach in the St. Louis public schools that served students like her. 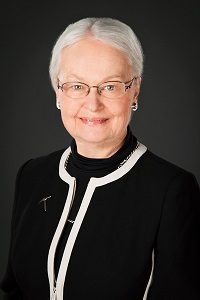 However, completing her undergraduate degree in Spanish – followed by a year-long Fulbright Fellowship to Brazil in which she studied Portuguese – proved to be transformative for the ways she viewed the world and thought about the value of higher education. Reflecting on her experiences in academe as she prepares for retirement this summer, the leader says her SLU degree “completely changed my life.”

“I became much more aware of other opportunities. They broadened my view of the world,” she says, noting that this shift sparked a desire to “move up a notch” from teaching in the K-12 space to higher ed, but specifically, public higher education.

“I am a huge advocate of public higher education because, when I was growing up, there were no public universities in St. Louis,” she says. “I began to understand how important access to higher education was for students like me who were the first in their family to go to college [or] from families with modest means.”

Natalicio would go on to earn a master’s degree in Portuguese and a Ph.D. in linguistics from the University of Texas at Austin before arriving at UTEP in 1971 as an assistant professor. The university has also known her as a vice president for academic affairs, dean of liberal arts, chair of the modern languages department and professor of linguistics.

Many community leaders acknowledge that it is hard to imagine UTEP without Natalicio, as her leadership spans three decades. Recognized as one of Fortune magazine’s Top 50 World Leaders in 2017 and included on the 2016 TIME 100 list of most influential people in the world, she is the longest-serving president of a U.S. major public research university with two “bold” goals she is proud to have achieved.

One goal was ensuring that UTEP’s student demographics reflected the surrounding Paso del Norte region, and the other was ensuring that the degrees students earn hold high value in the marketplace, graduate school or wherever they decide to go next, Natalicio says.

Situated along the U.S. southern border, UTEP’s current student population is 80 percent Mexican-American, nearly 55 percent first-generation and half of all undergraduate students come from families in the lowest income quartile. The university similarly offers 170 bachelor’s, master’s and doctoral degree programs and has $95 million in annual research expenditures from agencies such as the National Science Foundation, the National Institutes of Health, the Department of Energy, the Environmental Protection Agency, the National Endowment for the Humanities and more.

“We established a mission of access and excellence. It only took 30 years, so it can be done,” Natalicio says, adding that many university stakeholders initially told her to choose between serving the public or becoming a top research university. “We argued that we had to do both.”

UTEP’s enrollment grew from 15,000 to more than 25,000 students under Natalicio’s tenure, and the university is a leading producer of Hispanic graduates in fields like the biological and biomedical sciences, engineering and homeland security, among others.

Natalicio firmly believes that a university leader must understand their students to serve them well. Under her leadership, UTEP led the creation of the El Paso Collaborative for Academic Excellence, which brought together the university, El Paso Community College, local school districts and business leaders to ensure that they are not “responsible for creating any barriers for any students to move from Pre-K to 16,” she says.

Aligning students’ academic journey has enabled UTEP to cultivate a data-driven culture where officials share data with the high schools to improve their own teaching operations; advising models are “very intentional and assertive”; and, through a range of student support strategies, students can receive emergency loans, for instance, or other interventions to assist them academically or personally.

“I love what I do,” Natalicio says of helping to transform students’ – and their families’ – lives.

Dr. Heather Wilson will succeed Natalicio as the university’s next president. Natalicio notes that continuity in leadership will be critical for steadily moving the university forward into the future.

Natalicio’s advice to the next generation of educators is to understand the responsibility that comes with their role, to “take a pulse” of their students and ecosystem and to always keep in mind the positives of being an educator.

“I do think that most of us get into higher education because we want to have an impact on people’s lives. We have to understand that, in whatever our setting, we must be the catalyst for those opportunities,” she says. “We have the serious responsibility not only to students of modest means, but to our country, our region, our economy. The stakes are really, really high to be successful.”

As Natalicio steps down this summer, she hopes to leave a legacy in which students leave UTEP empowered to achieve their dreams.