ATLANTA— The United Negro College Fund brought together representatives from historically Black colleges and universities to strategize about how best to prepare students for the shifting 21st century workplace.

“The CPI Convening and Data Institute is an opportunity to lift up innovation and promising practices at HBCUs, while also integrating the distinct but interdependent streams of work that the UNCF Institute For Capacity Building drives at HBCUs,” said Dr. Brian Bridges,  vice president of research and member engagement at UNCF. “This convening is a great opportunity to surface how social justice undergirds all work at HBCUs.” 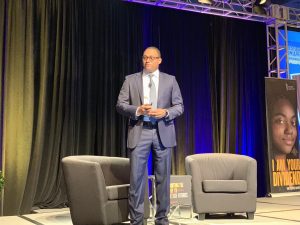 Indeed, a number of well-known speakers such as Bryan Stevenson—a lawyer and activist—warned that HBCUs can and should be the drivers in changing the narrative about race in the United States.

“I would love to see HBCUs leading the inside-out movement,” said Stevenson, founder of the Equal Justice Initiative, the nonprofit organization that provides legal representation to people who have been illegally convicted, unfairly sentenced or abused in state jails and prisons. “Students go into prisons and share class space with those who are incarcerated.”

“Black representation won’t save Black people,” said Agnew, who led around-the-clock protests at the Florida state capitol following the shooting death of Trayvon Martin by George Zimmerman. “Protests have to be a part of student life to teach students how to exercise their free speech.”

Said Agnew: “We must teach our students to think about balancing the ‘Me’ and the ‘We’,” said the Florida A&M graduate. “We cannot forget that within our individualism, we are a part of a community.”

More than a dozen other sessions ranging from “Social Justice and the 21st Century” and “Visualizing Data for Consumption and Use” provided attendees with best practices on how institutions are using data to improve student outcomes and retention rates, ultimately helping students land jobs once they graduate.

“We must create a culture of giving back to the institutions that are responsible for students landing those top jobs,” said Sekou Kaalund, Managing Director at J.P. Morgan Chase. “Let’s anchor students to opportunity so that they don’t wander aimlessly.”