The number of jobs in computer science is expected to grow by 19 percent by 2026, according to the U.S. Bureau of Labor Statistics, but women graduate with only 18 percent of computer science bachelor’s degrees.

This summer, the University of Maryland continues efforts to combat the disparity with summer camps. 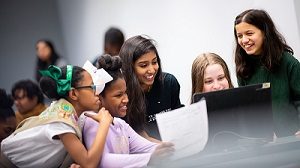 “This kind of problem can’t only be solved at the college level,” said Dr. Ming Lin, the Elizabeth Stevinson Iribe Chair of Computer Science with a joint appointment in the University of Maryland Institute for Advanced Computer Studies. “We have the responsibility to ensure that there is this pipeline of students that are being educated and trained from K-12, and this is an integral part of our efforts in terms of addressing the diversity and inclusion problem.”

The program began with CompSciConnect, a two-week computer science camp geared toward middle-school girls that started in 2012. CompSciConnect was designed for students to attend for three summers, building their skills each year.

Campers spend their days learning about programming, robotics, cybersecurity and more. After the summer, kids can connect with each other, review what they learned at monthly meetings and have the opportunity to present their work at the annual CompSciConnect Showcase at the end of the fall semester and at Maryland Day at the end of the spring semester.

Now the Maryland Center for Women in Computing runs 13 camp sessions, serving 300 students from elementary school to high school. The center also oversees an after-school program at seven schools and monthly events for students, including workshops with Girl Scouts of America to help scouts earn their robotics badges.

“They get [a project] to work, and they just dance,” says Dr. Jandelyn Plane, the director of the Maryland Center for Women in Computing and the new director for the Iribe Initiative for Inclusion and Diversity in Computing. “If we could bottle the energy in the room, we could sell it and be millionaires.” 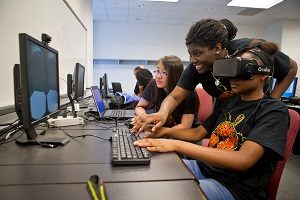 In addition, students who have access to computing courses often come from privileged backgrounds or have parents in STEM fields, perpetuating a lack of diversity.

Plane described her work with campers as “a Band-aid.”

“Until we get computing required in every school, we’re not going to reach parity,” she said.

Students with limited exposure to computer science are also deterred by misconceptions about the field.

“If you talk to middle school students, they think it’s coding. You’re sitting alone in a dark room in front of a computer eight hours a day,” Plane said. “They don’t see the problem-solving fun, the group support, the breadth of how it gets applied. CompSciConnect is trying to break all those stereotypes.”

The summer camps are one part of the computer science department’s multi-pronged effort to support underrepresented students – particularly women, African-Americans and Hispanics in computer science.

The commitment has yielded results. In the last five years, the number of female undergraduates in the department doubled and the number of students from underrepresented minorities grew by 50 percent.

“It’s not like one day overnight we have achieved this,” department chair Lin said. “It’s actually a very long-term commitment by the department … to make sure we continue to push for broader representation and participation from students of all backgrounds.”

Earlier this year, the department launched the Iribe Initiative for Inclusion and Diversity in Computing, which serves as the new umbrella for the Maryland Center for Women in Computing. With the help of a $1-million grant from University of Maryland alumnus Brendan Iribe, the initiative provides tutoring for introductory computer science courses, a speaker series on computer science and inclusion and funding for students from underrepresented backgrounds to attend conferences, among other resources.

In addition to Plane’s leadership, the effort is guided by the department of computer science’s Inclusion and Diversity Committee and a new student advisory board.

Lin hopes University of Maryland’s inclusion efforts – for students from elementary school to college – can help reduce the disparity in the computer science industry.

“We’re trying every single effort that we can to address this problem,” she said. “We are hoping we are going to create a more inclusive and more welcoming environment and a better learning environment for all different groups, for people of all different backgrounds. This is a program for all.”