In an era of scarce resources, colleges and universities are increasingly turning to big donors to fund efforts focused squarely on closing achievement gaps in science, technology, engineering and mathematics fields (STEM).

For more than a decade, institutions have tried — without much success — to address the ongoing disparity. Still, that has not kept them from trying. 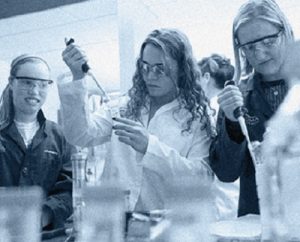 “The time is never right to simply throw in the towel because there is so much that can and should be done to help move the needle when it comes to STEM,” says Dr. Daphne Greenfield, an educational consultant who provides ongoing guidance to colleges and universities on how best to focus their work on underrepresented groups. “Critical resources are needed now more than ever before to help turn the numbers around.”

Indeed, while STEM has become a buzzword in educational and professional circles, it has become increasingly difficult to recruit women and minorities to such academically diverse fields.

Experts note that historically, these groups have accounted for a small fraction of college students who pick STEM majors. In fact, according to a recent report by the U.S. Census Bureau, though women make up nearly half of the American workforce, they constitute only 26 percent of STEM workers. Similarly, African-Americans account for 6 percent and Hispanics for 7 percent of professionals currently employed in a STEM-related career.

“Clearly, we have a lot of work to do,” says Greenfield. “And industry and research has to help fund initiatives and studies that will allow faculty at colleges and universities to work on finding some tangible solutions.

Sonoma State University has recently been awarded $1.3 million in conjunction with three other California based colleges.

The Learning Lab has committed an annual budget of $10 million to increase learning outcomes and close equity and achievement gaps across California’s public higher education segments. According to officials, the focus this year is on curricular innovations that combine educational technologies with the science of learning to reduce equity and achievement gaps in online and hybrid STEM gateway courses.

Drs. Carmen Works and Jennifer Lillig-Whiles — two Sonoma State chemistry professors — will collaborate with professors at UC Berkeley, College of Marin and Diablo Valley College to create online transferable modules for gateway STEM courses that will be accessible to college faculty across the state of California.

The project will look to create more equitable and inclusive classrooms and combat evidence that shows underrepresented students — such as female students and students of color — leave science in greater numbers than majority students.

“Jenn and I are both very excited to do this meaningful work with great collaborators,” says Works. “We have both spent almost two decades at SSU developing these types of learning and teaching approaches and feel grateful that our efforts have been recognized.”

According to college officials, the online modules will focus on introductory-level STEM courses, specifically in chemistry. Works, Lillig-Whiles and the six other co-principal investigators will develop modules and classroom strategies for engaging underrepresented students and helping increase their access to support networks. In addition, they will create faculty development modules to educate chemistry faculty so that they support student learning and a student’s sense of belonging. 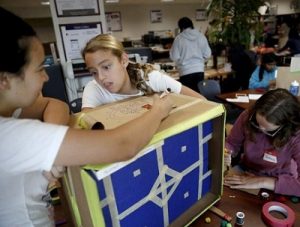 SSU students in a STEM program funded by the California Education Learning Lab.

The research phase of the project will take place throughout the summer with the grant extending through June 2022.

Reaching out to the community

This project, SSU officials say, is part of an ongoing effort to promote STEM at the institution and beyond. As part of its ongoing efforts, SSU hosted a graduation ceremony for area high school students who participated in the Mike Hauser Academy, a three-week immersive STEM program that was sponsored by the Santa Rosa Metro Chamber.

The academy caters to incoming 9th-grade English language-learner students and students who could benefit from extra math and science support. The students get opportunities to visit STEM-related companies and interact with engineers and professionals. They also participate in hands-on activities to see how classroom lessons apply to STEM occupations.

“I really liked having all my friends and I go to different companies and learn new things,” says incoming freshman Sophia Craig, who was among the graduates at the ceremony. “We learned how other people use math and science in their everyday jobs, and it was neat to see.”

At the ceremony, Hauser Academy students were invited to hear from a panel of speakers including a Sonoma State student, SSU faculty members and academy alumni, each of whom discussed their educational journeys and offered advice to students about the college experience.

“It is increasingly understood that STEM innovation is farthest-reaching and most impactful when it builds on the strengths of a diverse STEM workforce,” says Dr. Lynn Stauffer, dean of the School of Science and Technology at SSU. “That means we need more young scientists, engineers and mathematicians breaking traditional molds. We need all of you to see yourselves as the future thinkers, leaders and changemakers in these fields.”

Launched in 2008, the academy was created by the late Mike Hauser, former CEO of the Santa Rosa Chamber. The academy is a Sonoma County-wide program — 78 percent of this year’s students came from low-income households and 77 percent are English-language learners.

SSU also hosted a free two-week STEM summer program for 24 area middle school girls. Known as the Girls Tinker Academy, the camp was designed to engage and inspire students in makerspace activities that encourage the exploration and development of technical, mathematical and design skills.

“I do not want girls to feel silenced or shut out by being a minority in the community of makers and innovators,” says Dr. Natalie Hobson of the Sonoma State Department of Mathematics and Statistics. “I wanted to provide a space for girls to create, explore, and grow without feeling unwelcome due to gender.”

Hobson, working alongside Dr. Anamary Leal from the Computer Science Department at SSU, notes that the Girls Tinker Academy “gives the girls space to make with other girls and develop relationships with strong female role models in the STEM community.”

Hobson adds that girls should start at an early age being involved in STEM activities so that they can have a wide variety of experiences to explore their particular interests and feel part of a STEM community.

Greenfield says that initiatives like the one at SSU are critical moving forward.

“STEM is the way to the future and unless we can find creative and innovative ways to engage young women and students of color, the future of industry will suffer greatly,” says Greenfield. “If colleges and universities want to be relevant, they can’t sit on the margins of this issue. They have to be a part of helping to find creative and meaningful solutions to this vexing problem.”

This article appeared in the July 25 issue of Diverse magazine.

Shoreline Community College Home Gets Boost From the Sun

From the Cultural Revolution to Computer Science