A Pennsylvania man has been jailed on $100,000 bond after being charged with making threats against Temple University and its police department while buying ammunition at a Walmart last week, according to a Washington Post story. 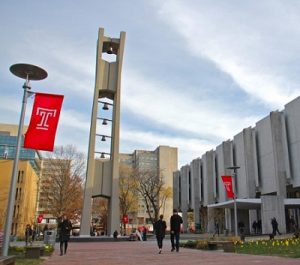 Buhler, 29, allegedly spoke to a customer in the sporting goods department of the Walmart in Tullytown on Wednesday night about security at Temple as he was buying five boxes of ammunition, according to a criminal complaint. He asked questions about campus police and the department’s response time, “eventually making the statement: ‘You will see something on the news in the next couple of days,’” the complaint said.

Buhler said he was buying .223-caliber rifle ammunition because “he knows that cops wear bulletproof vests,” the complaint continued. Authorities allege he had visited other Walmart stores to buy ammunition, knives, small-cylinder propane bottles, binoculars and a two-way radio.

Buhler, located at his Morrisville address, said the conversation with the Walmart customer was a mistake, acknowledged that he insinuated “violent things” and said he didn’t know what he was thinking when he said them, according to the complaint.

The filing also noted that Buhler was arrested in April in Flemington, N.J. on weapons offenses in connection with the possession of assault-type weapons, rifles, handguns, large-capacity magazines and prohibited ammunition.