A gunman opened fire into a crowd of 200 people outside a library near Clark Atlanta University on Tuesday night, wounding four students before escaping, according to an Associated Press report. 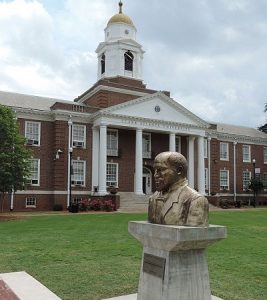 All four injured women were in stable condition Wednesday following the gunfire, which happened shortly after 10:30 p.m. Tuesday during a “pop-up” party. Atlanta police said no injuries are life-threatening.

The shooter was still at large Wednesday morning.

The shooting started after an argument broke out between two parties, investigators said. Video aired by WXIA-TV showed dozens of students running frantically after the shots sounded.

“It appears there were two separate groups that were targeting each other, and these people were just caught in the crossfire,” Atlanta police Capt. William Ricker told reporters.

Brooklyn Scott, a junior at Clark Atlanta, was among students who told the Atlanta Journal-Constitution that the shooting underscores a need for more campus police officers and security measures.

On Wednesday, there was a heavy security presence on campus and in front of the library. A couple of Atlanta police officers stood on a corner across the street.

Clark Atlanta’s Office of Religious Life announced a prayer vigil for Wednesday evening. “Evil will not have its way on our campus,” it said on social media.