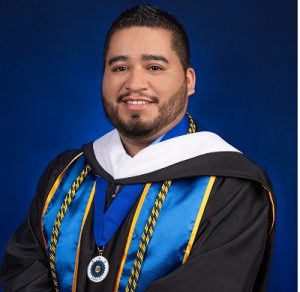 When Miguel Pimentel Davila was a first-year student at California State University East Bay, his average day went a little something like this:

“It was really, really challenging my first year,” says Pimental Davila. “I didn’t have enough time to study and do my homework.”

Pimentel Davila couldn’t sustain the routine. His GPA dipped to 1.9, putting him on academic probation. His parents told him to quit his job, and each took on two jobs themselves. During his last year of school, he used a patchwork of scholarships to pay off his tuition.

For undocumented students, Pimentel Davila’s story isn’t uncommon. Undocumented students — including those with Deferred Action for Childhood Arrival (DACA) status — can’t receive federal financial aid because they are not U.S. citizens. So, they have to scrape together the funds for college themselves.

This puts them at a distinct disadvantage. Over half of all undergraduates — 55 percent — receive some form of federal financial aid to pay for college, according to the latest National Postsecondary Aid study.

And it’s easy to see why. On average, undergraduates pay $17,237 a year for tuition, room and board at public institutions and $44,551 a year at private nonprofits, according to the National Center for Education Statistics.

That’s a lot of money for any low-income student. And undocumented students are paying these sums without a key resource where their classmates turn for help.

This isn’t an insignificant student population, either. A 2019 report found that nearly 100,000 undocumented students graduate from U.S. high schools every year. Meanwhile, DACA provides temporary legal status for more than 669,000 undocumented immigrants brought into the U.S. as children, according to 2019 U.S. Citizenship and Immigration Services data.

Other states are getting creative. For example, in August, the Arizona Board of Regents decided to offer a “non-resident tuition rate” to undocumented Arizona high school graduates, a price between out-of-state and in-state tuition.

Schools, meanwhile, are making their own strides. For example, the University of Virginia will offer need-based financial aid for in-state DACA students for the first time this academic year.

The University of Michigan just changed its in-state tuition standards for fall 2020 to make it easier for DACA students to qualify. Before, students who proved their residency status had to enroll within 28 months for in-state tuition. Now, undocumented students have 40 months to scare up the money for college.

Efforts like this “help a lot,” says Sergio Rodriguez-Lopez, a DACA recipient and undergraduate at the University of Illinois Urbana-Champaign. “I don’t think I would’ve been able to go there if it was out-of-state costs.”

Rodriguez-Lopez is taking a year off to work because his scholarship money alone won’t be enough to afford his senior year of college. This is the second time he’s had to delay school to save up. After his high school graduation, he spent a year working two retail jobs.

“It was a lot of moving, bending, lifting heavy stuff,” he says.

“It was intense, that’s all I gotta say — back-to-back, two fulltime jobs. Sometimes I didn’t sleep. Sometimes I went days just feeling awful. But I had to do it.”

The combination of scholarship funds from his school and in-state tuition at least helped him “finish a few years there before running out of funds,” Rodriguez-Lopez says. He’s optimistic about returning to school next fall.

“I’ve already done this before,” he says. “It worked out for me, and it should work out again.”

Arroyo Nolasco graduated from DePaul University in 2017. She grew up in a mostly White, middle-class Chicago suburb where her peers took attending a four-year university for granted.

Arroyo Nolasco started off at her local community college. At one point, her mom was working three jobs and her dad had two. She also worked to help her parents with costs.

While in-state tuition helped Arroyo Nolasco, she “didn’t have enough resources or access to information about how to pay for college or in-state tuition,” she wrote in a Facebook post.

She started school in 2012, the first year of the DACA program.

As a sociologist at California State University, San Marcos, she interviews undocumented high school students as part of the UndocuResearch Project. Her team has been “very shocked” by the “lack of information,” she says.

“We feel like our institutions are really out there trying to spread the word,” she says. “But the word is not getting to the students — or through the schools to the students.”

Aside from in-state tuition, undocumented students have other resources available to them such as private scholarships.

Still, their choices are limited, says Gabriel Hernandez Acosta. He was undocumented when he applied to college and later received DACA status.

He helped his parents finance his undergraduate education at Mount Mercy University through academic awards from his school. When he looked for outside scholarships, many listed U.S. citizenship as a requirement or asked for his Social Security number. He didn’t have DACA yet, so he wasn’t eligible.

“I didn’t have any of that stuff at that time,” Acosta says. “For me, it was a fear of, if I get in, are they going to release my information to the government or immigration? It was really scary to apply to a lot of the scholarship opportunities. I wasn’t able to apply to the majority of them.”

Now, Acosta is an admissions counselor at Mount Mercy and works with students like him, among others. He helps them think through what they can afford and how.

Clark-Ibáñez says the fight for college affordability for undocumented students needs to start in high school.

She emphasized that parents are an important part of the financial equation, and high schools fail to take them into account. In her research with high school students and teachers, she often finds that even “super ally” educators and counselors, who regularly talk with undocumented students about their college options, often have no contact with students’ families.

To help undocumented students, high schools need to make parents a part of the conversation, she says.

“The decision to go to college is not an individual decision,” Clark-Ibáñez says. “It’s a family decision that affects family economy, sibling care, maybe elder care. For students, parents are their roots and their wings.”

Clark-Ibáñez also thinks it’s important for both high schools and colleges to have at least a “point person,” a staff member knowledgeable about undocumented students’ financial options.

Some students suggest that colleges and universities offer more scholarships or long-term payment plans to spread out the costs over time.

But more than anything, students expressed that they want to be visible — that they want their schools to not just offer advising on college affordability for undocumented students, but to do it outwardly and proudly.

“A piece of paper does not define a person,” says Rodriguez-Lopez. “A person defines their future and defines who they are and what they’re going to do in this world. Schools should be more sensitive to that. Just because we’re undocumented doesn’t mean we don’t have dreams. We want to inspire people, we want to push the boundaries like anyone else, we want the opportunity to change the world.”