Mo’ne Davis is perhaps the most unique college athlete ever. But at the same time the freshman middle infielder on the Hampton University women’s softball team is no different than any other college student, and that’s how she wants to be treated.

Never mind that at age 14 she became the first African-American girl to compete in the Little League World Series with an all-star team from Philadelphia and the first girl in history to pitch a shutout and earn a win.

Disregard that Time magazine named her one of The 25 Most Influential Teens of 2014, and Sports Illustrated Kids named her SportsKid of the Year for 2014. So, what if Spike Lee directed and produced a documentary about her titled, Mo’ne Davis: I Throw Like a Girl, and American League MVP Mike Trout and NBA MVP Kevin Durant sent her congratulatory messages.

“I came here to get an education,’’ Davis says of becoming a Hampton Pirate. “That’s the bigger picture. We’re all here to graduate.’’

All the students at Hampton may well be there to graduate. But Davis is the only one who had an ESPN camera crew shadow her on her first day of classes in August. Nor did any of them participate in the 2015 NBA Celebrity All-Star Game or have a memoir written by Hilary Beard titled, Mo’ne Davis: Remember My Name: My Story from First Pitch to Game Changer released in 2015.

There is no doubt that Davis is a bona fide celebrity. She met President Barack Obama and First Lady Michelle Obama, appeared on The Tonight Show Starring Jimmy Fallon, The Today Show, Good Morning America and CBS This Morning all before her 16th birthday. But when it came time for her to introduce herself to her new teammates during the Lady Pirates’ first team meeting, she could easily have said, “I’m Mo’ne Davis. Y’all know who I am.’’ Instead, she simply stood up and said, “I’m Mo’ne,’’ and in her words “kept pushing.’’ 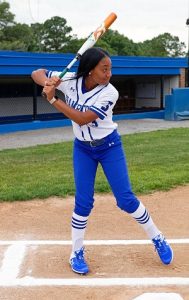 Davis has settled into life at Hampton as a communications major in the Scripps-Howard School of Journalism in relative obscurity. Her day-to-day routine is a far cry from the times when she had to pull a hoodie tight over her head so she could walk around Williamsport, Pa., without being hounded for autographs during the 2014 Little League World Series.

“I just love it, being able to go to class and walk around like I want and not feel like I have to do things for others,’’ she says. “I expected it, but at the same time I didn’t. It’s a nice thing to realize I’m just one of the students. I’m nothing special. I don’t know what I would do it were the other way around.’’

Davis gets an occasional question from teammates about her experiences. But none of them are awe struck by her celebrity.

“Basically, I’m just another player on the team,’’ she says.

Davis grew up playing tackle football against the boys in her Philadelphia neighborhood, an experience that made her mentally tough and allowed her to develop a game that’s different than that of girls. She was a multi-sport star at Springside Chestnut Hill Academy, excelling in softball, basketball and soccer besides pitching for the Anderson Monarch Baseball Club. Basketball was her best sport. Her dream had been to play college basketball for perennial national champion UConn and then move on to the WNBA. Things changed when she suffered an ankle injury playing basketball. Being away from the game gave her time to reflect, and she realized that basketball wasn’t fun anymore.

“I just wasn’t enjoying basketball,’’ she says. “I just had a natural talent for it and didn’t work out as much as some others did, but I was still holding my own. Basketball wasn’t a challenge for me and it wasn’t fun. I knew that with softball, you’re going to fail no matter what. I like to fail and see how I can bounce back from it, see how mentally tough I am. I know that you can never be too good at this sport. There are always going to be ups and downs. Which I think makes you the best person you can be.’’

Having settled on a sport, Davis was still undecided about which college she would attend late in the summer of 2018. She was considering junior college or even taking a post-graduate year to sort things out. In the meantime, she wrote to several schools expressing interest in their program. Hampton was one of them. Bethune-Cookman in Daytona Beach, Fla., was another. Most of the schools told her their 2019 recruiting classes were full.

The response from Hampton was different.

“I wake up to a ton of emails,’’ Nicholson says. “I woke up to an email from a young lady like any other saying she was interested. The name sounded familiar but it didn’t register. I said, ‘wait a minute. Is this the same Mo’ne Davis? I haven’t heard anything about her in four years. There’s no way.’’’

A Google search confirmed that the email indeed was from that Mo’ne Davis.

Nicholson immediately answered Davis’ email and suggested that she attend an upcoming camp at Hampton. Nicholson had never seen Davis play softball and had no idea what to expect. But it only took one glimpse to know that whatever “it” is, Davis had it.

“What I was most anxious about was seeing her with a ball in her hand and seeing what she could do,’’ Nicholson says. “The minute she picked up a ball, and the way she played catch, the way she threw it, just right there told the story. I knew I wanted her.’’

Bethune-Cookman also responded positively to Davis and remained in the picture. Davis arranged to take official visits to both schools. Her trip to Hampton during Homecoming, sealed the deal.

“You kinda know what feels right from when you walk on campus,’’ says Davis, who was interested in attending an HBCU to balance her high school experience in a mostly White environment. “It just felt right. Everyone was speaking. Team members took me on a tour of campus. I knew from there it was the right choice, the right fit. So many different classes came back. Everybody knows everybody. It was like a big family.”

College life has been an adjustment for Davis academically and athletically. But there have been no major issues. Says Nicholson: “Davis, like any of our kids, is dying right now. They’re tired. Their bodies are exhausted. There are trying to figure out time management, getting in the rehab room, getting stretched out. They are gong though a lot. She’s tired but she’s doing a fantastic job.’’

Despite her stardom, Davis has had to make some adjustments after having mostly played basketball.

“I’m learning every day,’’ she says. “The girls are being patient. The game is quicker. You have to be on your toes and think ahead and keep it fresh in your mind. Hitting probably will be a little different when we play other schools. I just have to keep working.’’

On the academic side, Davis says, “the only thing I’m struggling with is adjusting to homework with everything being online.’’

Off the field, success is predicted for Davis as well. B. Davida Plummer, dean of the Scripps-Howard School of Journalism and Communications, expects Davis to achieve the same level of success in her professional career that she has had as an athlete.

“I think she will be the player, athlete journalist commentator newsmaker of her generation,’’ says Plummer, a former television news director whose job included hiring on-air talent. “When I hold a conversation with her, I can see she’s not going to skip any rungs on that ladder. She wants to grow. That makes me think she will have sustainability. There is a core focus that will sustain her. She’s not missing classes; she’s not sliding into third base.’’

Nor is Davis expecting preferential treatment. As a promising student in media studies, she was approached about an opportunity to be involved in covering the 2020 Winter Olympics. The diva athlete likely would have responded, “I’m there. Count me in’’ without giving it a second thought.

Not Davis. Her response: “That’s really, really cool. I need to talk to my parents first and see what they think, and I need to check my practice schedule.’’

“It’s how I was raised,’’ says Davis, crediting her parents, siblings, coaches and teammates for helping her to be the person she is today. “It’s from them. They shaped to who I am. They helped me stay grounded. Everybody who knows me, know I’m a really chilled person.’’