Critical topics that focused on how historically Black colleges and universities can forge public/private partnerships to how they can enhance their narrative, was front and center at the second annual National Summit for Sustainability of HBCUs.

Co-chaired by Dr. Roselyn Clark Artis, President of Benedict College and Thomas W. Dortch, Jr., Chairman of 100 Black Men of America, the Summit brought together HBCU leaders and other stakeholders to strategize on key issues relating to student enrollment, fundraising and media relations.

Dr. Belle S. Wheelan, President of the Southern Association of Colleges & Schools Commission on Colleges (SACSCOC), the regional accrediting body, discussed some of the ongoing challenges that HBCUs face and how important it is that these institutions partner with each other to ensure their survival and longevity. 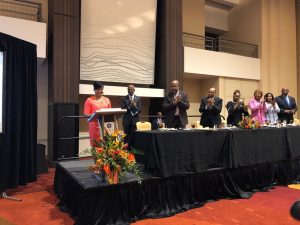 “It’s important for the family to gather around and take care of each other,” said Wheelan, who talked about declining enrollment and challenged HBCU leaders to not only recruit traditional age college students to their campuses.

“I’m optimistic about 90 percent of them,” said Wheelan. “There’s some that are struggling and we worry about them and we do what we can to help them get through, but it’s tough.”

Dr. Kevin James, interim president of Morris Brown College—the Atlanta HBCU that lost its accreditation in 2002 but has remained opened with about 40 students—said that the two-day Summit was particularly useful especially since he is working to get the college, which was founded by the African Methodist Episcopal church, reaccredited.

“I always like coming together with other HBCU presidents to learn as much as I can, especially being a newer president myself,” said James, who added that the college recently received a $500,000 grant from the National Park Service for the restoration of Fountain Hall, a historic campus landmark that once housed the office of Dr. W.E.B Du Bois. “The sessions were very useful, especially those on fundraising and philanthropy and accreditation.”

Artis said that 39 of the 103 HBCU presidents were in attendance this year.

“I think we had impactful panels and discussions on issues of sustainability into the future,” she said, adding that government officials, corporate executives and foundation presidents were eager to brainstorm with HBCU leaders about best practices and ways to increase resources to their institutions. “We tried to think of every possible angle to bring resources and capacity to our institutions.”

Artis said that this year’s Summit focused on a few key areas, including shared services and collaborations; honing the HBCU brand and narrative and ongoing infrastructure and support, including “finding partners who are willing to come to the table and invest in HBCUs is critically important,” she added.