A forever home can be a notion, a heart’s desire and an elusive place for many foster youth whose lives know more frequent stops, short-lived placements, and revolving doors than anchors. Growing up in Tampa, Fla., Cory Carter was one of them.

Now 33, Carter was just weeks old when he became a ward of the state. “I guess you can say that I was born into the foster care system.” Addicted to drugs and unable to care for Carter and his siblings, his mother went to jail. Carter, who is Afro-Cuban, cycled through nearly 30 foster homes by the time he was 18. ­ That’s the age that he was required to exit the system. Carter had aged out. Every year, more than 22,000 youth in the U.S. must also leave when they turn 18 or 21, depending on the state. Many exit without a safety net or the chance to be reunited or connected to family.

The process left Carter instantly homeless. For foster youth who age out of the system, experiencing homelessness is common and the percentage who end up on the street is high — 28 percent by age 21. Also common is getting tangled up in the criminal justice system. Such outcomes can be especially troubling for Black youth who have long been overrepresented in the foster care system. When these youth exit or emancipate, they will likely be on track to face higher levels of poverty, unemployment and homelessness. These are among the challenges that are also exacerbated by race, according to researchers at the Annie E. Casey Foundation. The foundation’s “Fostering Youth Transitions” is the first-ever data report to assess how young people in the U.S. make the transition from foster care to adulthood. 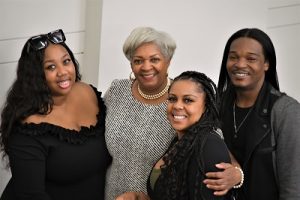 A decade earlier, in 2008, those poor life and educational outcomes that existed for youth who aged out of the system also concerned the president of the city’s only historically Black university. The national data told him that just 50 percent of foster youth graduate high school by age 18. Also, just 2 to 9 percent of foster youth obtain a bachelor’s degree by the time they’re 26, compared to 36 percent of the general population. The research, which also showed that two-thirds never go to college, was like a call to action for Dr. Ronald L. Carter, then president of Johnson C. Smith University (JCSU) and a foster parent. Working together with Dr. Helen T. Caldwell, who was at the time the dean of the College of Professional Studies and a social work professor, and others, the result was the Foster Care Initiative. The recruitment, retention and support program at the private Black university would help put young people making the leap from foster care to adulthood on a path that leads to college and a bachelor’s degree — and provide them with a safety net.

Today, much of the national research on college-going and foster youth continues to be dismal — but not all of it. For these youth, it appears that support makes the difference. Champions for former foster youth at JCSU say that support that keeps students from falling through the cracks is what they have relied on since launching the Phasing Up to New Possibilities Scholars Program (formerly The Foster Care Initiative). In its 10 years, a network of support and partnerships from the community, on campus and across the nation is what helped to get 22 former foster youth, including Cory Carter, to the graduation finish line at JCSU, said Patricia K. Newell, who directs the Phasing Up-Guardian Scholars Program. She announced that tally in September at a daylong symposium in Charlotte, N.C. on foster care to mark the program’s milestone anniversary.

Many of those partners, supporters and advocates for foster youth and Phasing Up participated in the event. “We are all taking this bull by di­fferent horns, but we are also learning from each other,” said Jarrett Pratt, a presenter at the event, on the patchwork of campus, philanthropic and community-based e­fforts underway to support those who have aged out of care. Newell invited many of them to the forum, including the Atlanta-based nsoro Foundation, First Place for Youth in California, and the Gamecock Gateway program at the University of South Carolina.

Pratt directs the Sullivan-Deckard Scholarship Opportunity Program at Cleveland State University (CSU). Like Phasing Up, it transitions former foster youth from care to college. The CSU program also moves financial and housing mountains that Newell dreams of for her students. In Pratt’s program, tuition and other college costs are paid for, year-round housing is free, and so are meals. Students are also o­ffered an on-campus work assignment.

The power of the village

The belief at JCSU, says Newell, has been that with a village of support — including neighbors, alumni, benefactors, sta­ff, students and departments across the university — the trajectory can change, especially for Black youth emerging from foster care. When the program began, planners also believed in the power of HBCUs to do what they’ve done for more than a century — nurture and equip students to graduate, no matter who they are and how they enter.

Phasing Up, considered the first comprehensive program of its kind for former foster youth at an HBCU, is one of several in the U.S. that are campus based. But after a decade, Johnson C. Smith University may still be the only HBCU serving this population. Each year, more than 20,000 youth age out of foster care. Pratt, a graduate of Fisk University, said about 23 percent of them are Black youth who need what Black colleges have to o­ffer, including professors and students who look like them and an environment where they can be embraced and culturally understood. Pratt also suggests that HBCUs need these students, too, especially as most of these institutions struggle to boost their enrollment. Replicating a program like Phasing Up is doable and aligned with the mission of Black colleges, says Newell, who is hopeful that targeting alumni of foster care would be seen as a winning proposition for HBCUs and for students. To launch and to be successful, it’s a venture, she said, that takes faculty buy-in and the will of the administration, among other things.

“What I look at colleges doing for foster youth,” she said, “is interrupting the challenges that can easily veer them o­ course once they leave care,” said Newell who is well aware of the daunting obstacles that alumni of foster care face in their educational journey — charting their own path for the first time, getting and paying for housing and college, and securing food, along with the basics they need to survive. Mental health and the e­ffects of trauma are also major concerns for youth transitioning from care to campus, said Newell, whose office works closely with JCSU’s health services and counseling teams to keep students connected to care and treatment.

A former foster parent, with her husband, to young Black boys, Newell understands how the system works — and what it takes to help young people become successful adults. Newell also knows what the research shows about the academic gap: foster youth are the most likely to drop out of school and the least likely to graduate high school, much less attend and graduate from college.

The program’s anniversary was another occasion for Newell to boast about her students and graduates. Among Phasing Up’s alumni and current students are social workers, an information systems engineer, graduate students, and a future physician and marine biologist. Quantifying Phasing Up’s impact is important, Newell said, but numbers don’t tell the whole story about what’s working to get former foster youth to and through college. She points instead to their individual and collective stories of resilience in the face of failed adoptions and homelessness, conquering steps to adulthood, new earning power that comes with college degrees, and college completion against the odds, the kind of successes that are hard to find in the familiar narrative of young adults who have aged out of foster care.

Newell recruits students from across the country, not just from the Tar Heel State, but some make it to JCSU on their own. Steven Reneau Jr. from Rialto, Calif. was one of them. The JCSU graduate shared his story while on a panel at the symposium.

To start a new life as a first-generation college student on the East Coast, Reneau “spent his last paycheck to purchase a plane ticket.” When he arrived on campus, the weary freshman struggled to piece together how to get enrolled and what to do next, until a staff person in the registration office put him in touch with Newell.

Phasing Up students are given a lot of support. From the beginning, they receive a student mentor with a similar background. They sign commitment forms about what is expected of them in terms of academics, tutoring and required meetings. Each student is assigned a student in the master of social work program, the university’s only graduate program. The social work interns follow an adult transition curriculum, meeting weekly with the students to discuss topics such as financial literacy, career coaching and professional development.

When Reneau came to JCSU, he had nothing — until Newell orchestrated a network of support. “When I became a part of the program, I was helped in every way possible from housing, groceries, books and paid internships,” he recalled. Sitting next to Reneau on the panel was Jayrah Topey, another Phasing Up alumni.

“We found family that we never really had,” said Topey, a sentiment that was repeated by others in Phasing Up who have benefitted from the program and the company of others who have been on the same journey through foster care. This small but growing “family” has crowned its matriarch “Mama Newell.” Although in their 20s and 30s, to Newell they are “her babies,” a term of endearment that she said will last long after the former foster youth have left JCSU as graduates — not as statistics.