Unlike most college presidents, Dr. Paul Broadie II has had the unusual task of balancing his time and leadership between two institutions, at the same time.

“I’m always up for a challenge,” said Broadie in an interview with Diverse. “I was honored that he asked and I thought that I could bring some of my talents to Gateway,”

With the additional responsibilities of running Housatonic and Gateway, Broadie wanted to ensure that he remained a “visible leader” on campus. He set up a schedule to spend time at each college two days a week and then alternated every Friday, adding that managing two institutions was accomplished through partnerships.

Its that on the job training that Broadie will put to good use next year when he begins his new job as president of Santa Fe College. 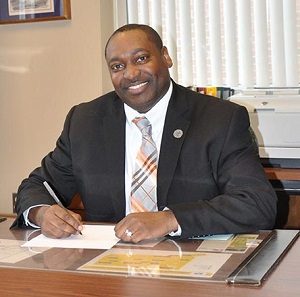 “I truly believe the president is an extension of the college so that when the community sees the president, they actually see the college,” he said. “So, I just make sure that I am active and extremely involved.”

To fully immerse himself at Housatonic and Gateway, Broadie learned the culture of both schools.

“Every institution has a different culture, a different mindset, a different way of operating,” he said. “For me, I took some time to make sure that I understood the culture of the institution so that I could be effective as a leader.”

Under his leadership, HCC was named one of the nation’s top 150 community colleges in the United States by Aspen Institute. At GCC, he was praised for creating a manufacturing program for unemployed and underemployed people in the New Haven community.

After earning his bachelor’s degree from Mercy College, Broadie started his career with every intention of working on Wall Street.

However, his career path shifted once he was offered a job by his alma mater to work in the admissions office. It was agreed that alongside his new job, Broadie would pursue his MBA from Long Island University. He later earned his doctorate from Colorado State University

Hesitant at first, Broadie began to enjoy working in higher education. His feelings were further validated after a student approached him and said, “this higher education experience changed my life.”

From there, he knew that higher education was a calling, not a job.

“It is something that I love to do because I can see how higher education can change lives,” said Broadie. “I’ve seen how it breaks cycles of poverty, I’ve seen how it closes equity gaps, I’ve seen how it takes a student and propels them forward and creates endless opportunities for not just that student but for families and generations.”

In a career that has spanned almost 30 years, Broadie said his biggest challenge has been funding.

“In some respects, there are students walking across the stage that never thought they could be successful in education. There are students walking across that stage that have children that are looking at them cross the stage and looking at them as role models,” he said. “So, for me, that is the most rewarding part. I look forward to graduation every single year.”

Broadie said that he was drawn to Santa Fe College because of the school’s core values and its focus on student success, community and partnerships aligned very closely with his interests.

Broadie said that he aims to help further develop SF’s downtown campus project, increase partnerships with local K-12 schools and universities across Florida. He said that he is also looking to build and expand on opportunities to build on dual-enrollment programs that would allow for students to complete both their high school diploma and associate’s degree at the same time.

“No good leader does those things alone,” he said. “For me, my recipe for success is working collaboratively with everyone to accomplish these things.”

University of Missouri to Raise Undergrad Tuition by 1%