Spalding University, a private liberal arts college in Louisville, Kentucky, opened a new athletic center this week, nicknamed the “Field of Dreams.” But not everyone is celebrating.

A spokesperson from Simmons College of Kentucky, the private historically Black college nearby, called the center a symbol of White privilege, sparking a broader discussion about gentrification and the disparities between HBCUs and predominantly White institutions.

Simmons College Spokesperson Krystal Goodner was addressing students and staff at the first Truthful Tuesday, a monthly series of campus-wide conversations spurred by the opening of the new athletic center. The event was an opportunity for students to share their feelings about the more than seven acres of fields within view but out of reach.

“This is not a Simmons versus Spalding situation,” Goodner said. But “when our students go outside and look at that field, it’s almost as if white privilege is being dangled in front of their face.”

According to Simmons College President Rev. Dr. Kevin Cosby, years ago, Simmons College tried to buy the property on which the athletic center now stands, and Ford Motors approached the college about creating an advanced manufacturing plant there, though it never came to be. In 2014, Spalding University bought the land for $1 million from Huber Book Enterprises and Dover Energy, finishing the athletic center this September. 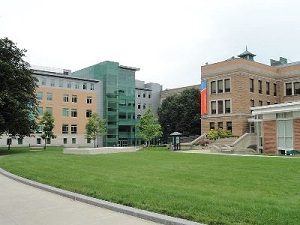 To some students, the new center is a symbol of the resources they lack at Simmons College – and the resources HBCUs lack more broadly. HBCUs have historically struggled with funding. Their endowments fall behind non-HBCUs by at least 70 percent, and a smaller portion of their revenue comes from private contracts, gifts and grants – 17 percent versus 25 percent, according to a 2019 report by the American Council on Education and the United Negro College Fund. From 2003 to 2015, private HBCUs like Simmons College have seen a 42 percent drop in federal funding.

At Truthful Tuesday, Cosby stressed to students that the resource gap they’re experiencing is about broader inequalities.

“Don’t think this is unique to Simmons…” he said. “All of our institutions are in trouble. All communities where there’s a high concentration of American descendants of slavery are in trouble. Why is this the case? The fact of the matter is something is wrong when you look at our campus and then you look across the street at what other people have.”

Simmons College Professor Jecorey Arthur told the room he was “very unhappy” about the reason for the meeting.

“Somebody, I don’t know who, had the audacity to name this field across the street from us the field of dreams,” Arthur said. “Whose dreams?”

For him, the solution to the apparent disparity is to build up the school’s resources, like student housing, scholarships, infrastructure and internships.

“We would not be a higher learning institution if we didn’t also present some solutions,” he said.

Urban planner and Simmons College Professor Joshua Poe also shared historical context about gentrification in Louisville and the income gap between its White and Black residents.

“There’s one thing that we know helps income increases in the Black community, one demonstrable thing that’s been known to make an improvement, and that’s investment in HBCUs,” he said. “It’s pretty simple. Given that, the philanthropic community in Louisville needs to wake up.”

Spalding University, meanwhile, celebrated the opening of its new athletic center on Wednesday with men’s and women’s soccer games against Greenville University and a “First Kick” ceremony.

The school frames the new fields as a benefit to the whole community, particularly because of its location. It extends across Ninth Street, the divide between the whiter and wealthier east side of the city and Louisville’s west side.

In response to reactions from Simmons College, McClure emphasized that the school “greatly values diversity” and that the project makes good use of vacant land.

“Spalding has been committed to its neighborhood for 100 years, and we continue to do our part to improve it,” she said in a statement. “The property where the fields are built was acquired more than five years ago on an unused former industrial site, and we are proud of how the transformation that’s taken place there will help the community.”

For Cosby, it’s not about Spalding University’s new fields. It’s about investing in the area’s Black students.

In a series of tweets, he suggested Spalding University “doesn’t get” the racial dynamics of Lousville and the needs of its Black residents.

“We do not want to play on their playground,” he tweeted. “We want our own institution funded the same ways there’s is.”