Excelencia in Education Celebrates its Quinceañera at ALASS Institute

Excelencia in Education celebrated its 15th anniversary with its Accelerating Latino Student Success Institute – or its quinceañera as Excelencia in Education President Sarita Brown put it. Higher education professionals gathered in Washington D.C. to examine the needs of Latino students, from federal policies to the faculty in their classrooms. 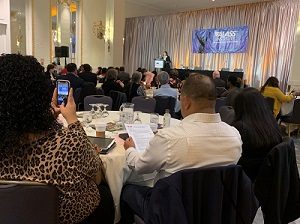 The event began Thursday night with an announcement of the 2019 Examples of Excelencia, four programs selected by the organization as models for creative, evidence-based strategies to improve retention rates for Latino students. This year, Excelencia in Education received nominations from 166 programs from 32 states, D.C. and Puerto Rico.

On Friday morning, the group reconvened for a full day of sessions to explore what makes these programs successful, and most importantly, scalable.

“What we believe most people in your seats need is a clarity about the strategic choices that were made to design the program, to build a program, the nature of how those programs are sustained and the capacity we can create together to replicate the tactics,” said Brown, addressing the crowd of higher education leaders.

The opening panel featured representatives from the four Examples of Excelencia to discuss how they implemented their programs and the outcomes for Latino students. One theme repeatedly surfaced – community.

Latinos make up 60 percent of Cal-Bridge scholars, who receive mentorship from both University of California and Cal State University system professors. But their peers are an important part of the program, Rudolph said. Latino students can feel isolated in STEM programs, let alone niche fields like astronomy, but “having others like them that want to do something not so typical is very, very important to them,” he added.

Other panelists echoed how valuable peer groups can be for their students’ learning.

Dr. S.K. Ramesh – an electrical and computer engineering professor at California State University, Northridge – directs AIMS², which stands for Attract, Inspire, Mentor, and Support Students. The program partners with community colleges to increase the number of low-income Latino transfer students majoring in engineering and computer science. He described the initiative as a “cohort-based model” where students work together on a collaborative project.

For UCLA assistant vice provost Alfred Herrera, the director of Center for Community College Partnerships, peer mentoring is “at the heart” of his program’s success. The goal of Herrera’s program is to increase transfer rates for Latino students from community colleges. Selected students participate in a summer program at UCLA and meet with a peer mentor repeatedly throughout the year.

He emphasized that faculty are also an important part of building community for Latino students, especially in STEM fields.

“STEM is not friendly to students of color,” Herrera said. “We all know that. Faculty and others in the STEM field oftentimes don’t understand the idea of critical race theory and how race and racism play into some of that.”

He highlighted the value of diversity training for faculty, and administrators, an idea that came up throughout morning panel discussions.

Panelists also talked about not only their strategies for building community but the challenges of deciding the bounds of that community – targeting Latino students in need while simultaneously serving their broader campuses.

Nichole Davari, the program director for Latino Achievers at the YMCA of Middle Tennessee, said 25 percent of her program participants don’t identify as Hispanic, despite the name. The program partners with nine public high schools in the Nashville area to help underserved students succeed academically through weekly meetings, test preparation workshops, college visits and more.

Despite the program’s demographics, her team decided against changing their title. She wants to make sure the specific needs of Latino students are met.

“We know that the Latino experience is valuable and is unique,” she said. “So, we’re never going to diminish our Latinidad.”

But at the same time, she’s happy to serve other minority communities in the process of uplifting her own.

“We serve all students,” she said. “We serve them as they come to us. One of the little jokes I like to make is we don’t build walls.”

The ultimate question is how to make sure these aren’t one-off programs but replicable steps in a shifting academic culture more conducive to Latino students’ success.

For Ramesh, this is his program’s heaviest task.

“Institutionalizing what we’re doing is the real challenge,” said Ramesh. “That is what we’re up against.”