Two students at the University of Memphis were allegedly kicked out of an off-campus party and subjected to homophobic slurs, prompting an investigation, WMC5 Action News reported. 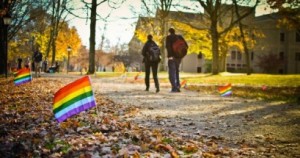 The students, Benjamin Buckley and Luke Chapman, say they attended a house party affiliated with a fraternity where they were threatened, called derogatory names, told they didn’t belong and ultimately pushed out into the rain.

“An off-campus incident involving possible bigotry has been brought to my attention and has been referred for investigation,” University of Memphis President Dr. M. David Rudd said in a statement. “The Office of the Dean of Students is in the process of reaching out to students and others potentially involved.”