WASHINGTON— The Hill hosted a summit called “Diversity Matters” at the Newseum on Tuesday, showcasing a series of conversations about diversity in the workforce, from engineering labs to doctors’ offices to Congress to the corporate world. Headliners included Assistant Speaker Rep. Ben Ray Lujàn and actor Maulik Pancholy, known for his role in the hit sitcom “30 Rock.” 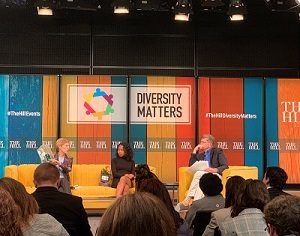 The day’s panel discussions touched on a variety of interrelated issues: diverse hiring practices, LGBTQ inclusion, women in STEM, equitable public health practices and more. But a shared question emerged in most of the sessions – how can industries create pipelines for more diverse employees?

Fostering diversity in higher education is part of the answer, according to David Sutphen, chief strategy and engagement officer at the education technology company 2U. He spoke on a panel about diverse hiring called “Opening the Aperture.”

In today’s workforce, students who don’t go on to pursue graduate degrees are “probably at a disadvantage,” he said. But for students from low-income families saddled with student loan debt, it’s “just not realistic” to go back to drop their work and go back to campus.

“The internet is going to be able to create greater access for nontraditional learners,” he said. “And I think the key is to make sure the access you’re creating is to high-quality education.”

Just as higher education is “beginning to grapple with the changing demographics of their student body,” he said, companies are now “struggling profoundly,” as well.

Corporate leaders often say they can’t find diverse candidates, but part of the issue is they hire the people they know, Sutphen added, so to make diverse hires, they need to build more diverse professional networks.

“Whoever you are in the company, whether you’re a member of an affinity group or you’re one of the White guys who’s running the business, everyone has to lean into this issue in order to move the dial,” he said. “Hard-to-find talent usually comes from a network of trusted connections.”

Sometimes that talent is hard to find because people from underrepresented groups doubt their abilities and shy away from applying for roles at major companies, pointed out Katherine Zaleski. Zaleski is the co-founder and president of PowertoFly, a job recruiting platform for women. She told the audience that large companies need to reach out to about 10,000 underrepresented women – and email them seven times – to get just 100 of these women to apply for a position.

“Through decades and decades, they’ve been told, ‘No, no, no, no, no you’re not qualified. You’re not going to belong here,’” she said. “Part of it is finding the people and part of it is actually engaging them and giving them the opportunity to feel like they belong at these companies. So, it’s a data problem, it’s a messaging problem and it’s an engagement/belonging issue.”

This struggle starts as early as childhood, according to Susie Armstrong, senior vice president of engineering at Qualcomm. She spoke on a panel called “The Next Generation,” where she described Qualcomm Thinkabit Lab, an engineering engagement program that’s free for underrepresented middle school students, alongside Annandale High School student Kaleia Cook, who participated in the program. The program is designed to be creative and “hands-on” for students “to pull them in, not weed them out,” Armstrong said.

She finds many of the students haven’t considered STEM fields.

“Why do we have such a pipeline problem? Whether it’s girls or whether it’s kids of color, [they] don’t see themselves in engineering jobs,” she said. “Somebody said to me, ‘Well, I thought engineers sit in a dark lab with a pocket protector.’”

Even with these barriers, panelists are optimistic that industries will recognize the value diversity brings to their work and will show willingness to reach out to underrepresented communities.

For example, companies are starting to see people with disabilities as “untapped talent,” said Taryn Williams, managing director of the poverty and prosperity program at the Center for American Progress. She sees company leaders beginning to “proactively reach out” and to ask themselves “what does it take to build out a pipeline of people with disabilities who can advance into C-suite?”

Elizabeth Marango, head of diversity and inclusion at Nestlé USA, said her company has had a “change of mindset internally” and is starting to see nontraditional graduates, like veterans, as an asset in terms of “transferrable skills.”

“We’ve broadened our thought process about what is the right talent and what type of background really helps us as an organization [to] diversify our ways of thinking and create innovation,” Marango said.