Dr. Daniel Wubah, president of Millersville University, keeps a special wooden box on his desk. His grandfather gave it to him before he died. And before him, the box belonged to his great grandfather. It’s about six by four inches with a carving of a tree on the inside. For Wubah, that box is a reminder of his two identities and roles. ­ 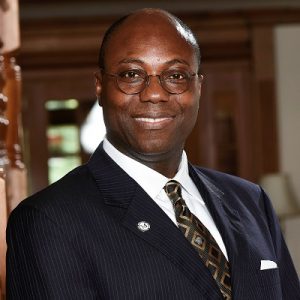 The trunk and branches of the tree remind Wubah of his life in the United States, where he lived as a 23-year-old graduate student. Wubah’s family, like his career, took hold and grew on American soil. But his West African roots are in Ghana where he was born and now serves as an African regional king or safohene. ­

The wooden box “serves as a bond for me,” he says. “It reminds me I have those two roles to play.”

For Wubah, the past two years have been a whirlwind. A year ago, in 2018, Wubah, a microbiologist by training, was named president of Millersville University. And in 2017, he was coronated king of a district in Ghana when his uncle, who was king at the time, passed away. Becoming king was a position Wubah said he was groomed for since childhood.

No doubt, leading a university while ruling a Ghanaian kingdom from Lancaster, Pennsylvania is demanding, but Wubah does it. The typical day of a king and a college president begins at 4 a.m. with a call to his council of elders in Ghana. Then he gets to the office at 7:30 a.m. to begin work as Millersville’s president.

Seeing more similarities than differences between the two leadership positions he holds helps Wubah to manage this juggling act. But toggling between being a royal and a president, he admits, has been a “learning experience.” Shifting roles and mindsets, too, is a daily effort.

“As a king, what I say is final,” Wubah points out. But “As a president, I don’t have absolute authority. “If we have an impasse on my cabinet, I can’t just decree this is what we’re going to do.”

But early training to be a king, says Wubah, is what also prepared him to lead in academia. For example, when he went to department meetings as an assistant professor at Towson University in Maryland, Wubah practiced listening first, then speaking, just as his late uncle in Ghana taught him. ­ These were skills that paid off.

Faculty came to respect and seek out his opinions, Wubah recalls. Before long, he was appointed the department chair. That role was one of several academic leadership positions he held before becoming president. Others included serving as deputy provost and vice president for undergraduate education at Virginia Tech; associate provost and professor of zoology at the University of Florida; and at James Madison University, associate dean, professor of biology and special assistant to the president.

Wubah’s upbringing in Ghana also informed two cornerstones of his work at Millersville: diversity and affordability. His father died when he was young, and Wubah’s mother worked as a seamstress to support him and his four siblings. Although his mother won a scholarship to attend school when she was growing up, her father wouldn’t allow her to pursue an education. This made her determined to give her children the opportunity that she missed to earn a degree. Wubah is a graduate of the University of Cape Coast in Ghana where he earned a bachelor’s degree in botany. He also earned a master’s degree from the University of Akron and a Ph.D. in botany from the University of Georgia.

“I have a very keen sense of what education can do for a family,” he says. “As an educator, it’s always been my goal that I will provide opportunities for first-generation students as well as students from diverse socioeconomic backgrounds.”

Wubah, the college president, dissects diversity in higher education like a botanist. A farm that’s homogenous, growing plants all from one seed stalk, is susceptible to disease while a heterogenous farm is more likely to survive, he suggests.

For Wubah, “the strength in diversity is a “basic law of nature.”

Focused on the work to be done at his university, Wubah says he committed to pushing its inclusion goals forward, with the aim of making the cost of going to Millersville affordable to all students.

Last year, for the first time, Millersville University lowered tuition by 3 percent. It also had a plan to lower the cost of pricey textbooks by providing financial incentives for faculty when they agreed to assign online versions of books and reading material. When faculty complied, they earned $1,000 to use for professional development. Looking forward, Wubah’s inclusion and affordability goals also include increasing student advising as a way to increase the percentage of students who graduate in four years, something that will save on tuition and fees.

“Diversity, inclusion and social justice are at the forefront of how he explains things, the values that he ascribes to them,” Brown-Haywood says of President Wubah. “I continue to look forward to the impact Dr. Wubah will continue to make on this campus, the system, the community, the region, and maybe even the world.”

When he steps into the role of king or university president, Wubah says his leadership approach is the same.

“As a leader, we should always remember it is the people who you lead that matters,” Wubah says. “For the coming year, I will continue using the same philosophy: cherish the people I work with, provide them with opportunities to excel in whatever they do and then the rest will take care of itself.”

TICAS Calls on Congress to Address Disparities in College Funding