Kweisi Mfume announced plans on Monday to run for the vacant 7th Congressional District Seat in Baltimore held by the late U.S. Representative Elijah Cummings, according to CBS Baltimore. 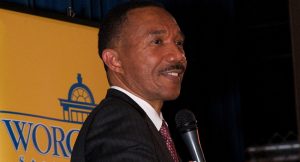 Cummings passed away Oct. 17. After his death, Maryland Governor Larry Hogan announced that the special primary election to fill his seat would occur February 4, 2020.

“A month ago I never imagined that I would be before you in this capacity, a month ago, my dear friend Elijah was alive and well,” Mfume said.

In 1996, Cummings replaced Mfume in Congress after he left office to become the president of the National Association for the Advancement of Colored People (NAACP). Mfume last ran for office in 2006 and lost in the Democratic primary to now Maryland Senator Ben Cardin.

He currently is chairman of the Board of Regents at his alma mater, Morgan State University.