For the second year in a row, the International Colloquium on Black Males in Education kicked off  by giving space to Black women in the academy to convene to discuss the challenges unique to Black women in a space that is overwhelmingly White and male.

The Black Female Forum, sponsored by Sisters of the Academy, highlighted a staggering truth: Black women represent 3% of college and university faculty, and 5% of college presidents.

“Sadly, it’s 2019 and we’re still talking about firsts,” said Dr. Tamara Bertrand Jones, president of Sisters of the Academy and associate professor of Higher Education and interim chair of the Department of Educational Leadership and Policy Studies at Florida State University.

“Being the ‘only’ of anything is really tiring, and it gets old really quickly,” said Dr. Joan Prince, vice chancellor for global inclusion and engagement at the University of Wisconsin — Milwaukee. 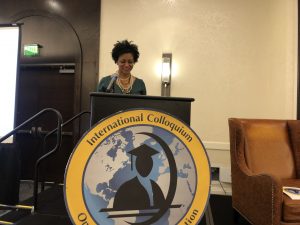 The women who have blazed trails as firsts in the academy said the key to being able to persist on a journey that is often more struggle than reward requires an immense grounding in self, and an understanding that prioritizing one’s self is not selfish, but necessary.

“You’ve got to figure out how your ‘what’ and your ‘how’ get you to where you want to be — so much of doing work is doing it so people feel whole, helps everyone grow, that empowers,” said Michelle Nettles, Chief People and Culture Officer at Manpower Group during the forum’s opening session.

Dr. Artanya Wesley, dean of students at the University of Wisconsin — Whitewater, said it is really important for Black women in particular to “celebrate the small wins, because this work can be exhausting at times, and the load can be heavy.” And find some balance, she said. “When I show up at work, I give 100%, but I love who I am outside of my job. My work does not define who I am; everything outside of it defines me.”

While universities are mostly structured around research, then teaching, and then service, it is important to remember that the ultimate goal is to add value.

“The university has an infinite amount of time to reach its goals,” said University of Wisconsin Professor Emerita Dr. Gloria Ladson-Billings, who advise women of color to always remember who they are and understand their place on campus. “You can’t just be in the Ivory Tower. These universities are in communities, and often abusing communities. They’re often causing the gentrification that are going on in the city” and contributing to the displacement of those individuals who are the most vulnerable, she said.

The impetus, then, is on scholars, and particularly Black women to consider that there are people who look like them, who have real needs, in the community surrounding the institution — but also on the campuses themselves.

“It doesn’t matter how much you love the university. The university has no capacity to love you back, so stop expecting it to do something it cannot do,” said Ladson-Billings.

Instead, she advised, finding some personal grounding and remembering your responsibility to the students is paramount. “What makes you think this is about you?” she asked. “It’s not about you.”

“Oftentimes, it’s an allegation and sometimes a burden to sit at those tables when we’re talking about the climate of the campus, the challenges facing those students,” said Wesley, adding that often those sitting at the decision-making tables are missing a core piece of the puzzle. “My journey was not an easy one, but when I listen to the stories of these students, there’s no way I can sit at a table and talk about policies at a chancellor’s table, and not ask how it’s going to impact students.”

Wesley said in her mind, and in the minds of many Black scholars, the missing piece is so simple: the systematic and institutional racism pervasive in this country, which permeates onto college campuses, creates additional burdens for Black students as they try to access, survive and thrive in higher education.

In many cases, simply allowing these students space to talk about their experiences, to share their stories with administrators makes a difference, and having an advocate who looks like them can be hugely instrumental to facilitating this.

But Ladson-Billings and Prince warned of the pitfalls of both students and faculty members falling into the trap of thinking all “skinfolk” are “kinfolk.”

“Everybody that looks like us isn’t for us,” said Ladson-Billings. “And that I think is the most frustrating thing, particularly for students, when they see somebody who looks like them and that person is in a position of authority, but that person is so sutured to the university” that the person is unable to identify with the student’s struggle.

The same is true for faculty members and those in positions of authority. Often, Ladson-Billings found herself “literally having to stumble into things, because there isn’t someone who is looking out for you.”

Prince said Black women on campus should learn that “everybody who’s Black is not your friend, and everyone who’s White is not your enemy.”

“Seek out every opportunity you can get your hands on, regardless of which hand is holding out the opportunity. And it’s hard to get students to understand that,” she said.

Ladson-Billings said it’s about maximizing opportunities, even when they seem sparse.

“The grit and perseverance that it takes to navigate predominantly white institutions as a Black female is a journey,” said Wesley. “This work can be challenging, but there’s also reward when I can touch the lives of students.”

Wisconsin Incarcerates the Most Black Men in the Country. Scholars Say Kenosha Protests Were A Long Time Coming