In September 1994, if you were a Black poet or needed assurance that Black poetry and its writers were not extinct but alive, cra­fting, publishing, teaching and flourishing, then the inaugural Furious Flower Poetry Conference was the place to be. And James Madison University (JMU) in Virginia’s scenic Shenandoah Valley was the destination.

Dr. Joanne V. Gabbin orchestrated the Furious Flower conference. She dedicated it to Gwendolyn Brooks, the late Pulitzer Prize-winning poet and her mentor. Gabbin says she expected about 100 to attend. Instead, more than 1,000 showed up for what was likely the largest gathering of Black poets and literary scholars in U.S. history. 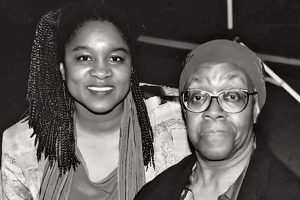 Since that first decade-defining gathering 25 years ago, Furious Flower has grown into an internationally recognized center for the study and preservation of Black poetry. By 2004, with JMU’s recognition growing as a hub for Black poetry and poets, the university’s then-president proposed a center dedicated to this work. A year later, in 2005, Furious Flower became the country’s first academic center for Black poetry, and Gabbin its executive director and founder. In 2016, the Center for African

American Poetry and Poetics at the University of Pittsburgh became the second such center dedicated to the study and legacy of African-American poetry and to operate with institutional support.

At JMU, Gabbin named the poetry center and the conference Furious Flower, from a line in a Brooks’ poem, “The Second Sermon on the Warpland.”

“I see Furious Flower’s singular contribution as providing a space where Black poetry is valued, respected and celebrated without regard to the established literary architects who have sometimes ignored its significance,” said Gabbin, who has been a professor and administrator at JMU since 1985. “Black poetry is on the world stage and Furious Flower has helped it to get there.”

Diverse spoke with Gabbin and Lauren K. Alleyne — assistant director of the Furious Flower Poetry Center, an English professor at JMU, and a poet — about what’s trending in the careers and making of Black poets and the challenges that come with doing the time-honored work of memorializing Black lives and amplifying Black voices.

DIVERSE: When you consider place and race, has it mattered that the nation’s first academic center for Black poetry is in the Shenandoah Valley and on a predominantly White campus?

But the conference happened at this university because I knew that students here would be open to knowledge about Black poetry. The students I taught were mostly White, but there were some Black students in the mix. They loved the African-American poetry that I taught them. So, I thought that I could not only present them with the poetry, but take things to another level by bringing the authors of this poetry to them. Because of their high school education, some of those students probably thought that poetry represented the product of some dead White man or woman; not someone whom they could actually see or maybe even touch. I wanted to dismiss the notion that poetry was dead. Poetry for me is living.

DIVERSE: Discussions around the need for academic credentials in the life of a poet are not new. What is trending?

ALLEYNE: When it comes to careers, credentials and the community, I think about Gwendolyn Brooks’ career how it spoke to the motivation for what became the Furious Flower Poetry Center. Brooks won a Pulitzer Prize, but along the way, in her career, the academy deemed her unqualified to teach, basically because she lacked a credential. This was unfortunate, but it is what motivated Joanne to elevate her and to launch the first national center on Black poetry at an academic institution. This also says something about this notion of insider-outsider [of the academy] and what it means to view the career of the poet as something that is lived as well as credentialed. The Furious Flower Center celebrates and supports Black poets, no matter the path that they take to do this work.

GABBIN: If you think about the major poets who have positions in the academic world, many of them don’t have doctoral degrees. And in the case of Gwendolyn Brooks, who was passed over, it wasn’t her academic credentials that were lacking, it was because some in the academy lacked understanding and respect for the field of Black poetry and what she brought to it. In addition to Brooks, I also think about Sonia Sanchez and others who first had to get multiple books published before they were even considered for an academic appointment.

ALLEYNE: Most of the poets on our roster don’t have Ph.D.s, they have MFAs. And their bios end with ‘teaches at ….’ So, we go from 1994, when Brooks couldn’t be in the academy, to 2019, when almost every person on our list is in the academy.

GABBIN: Yes, poets earning MFAs is something more recent. If you go back 30 years, you would find that few poets and writers even had an MFA, but because they had published books, they were accepted into the academy. DIVERSE: What draws one Black poet to the academy and another to the community or to a place where they can have a foot in both worlds?

ALLEYNE: It can be a number of reasons that draw people to where they do this work. But there is something to be said for being paid to practice your craft and to pass it on.

GABBIN: There are very few poets who are able to exist on their poetry alone. But most people, if they are fortunate, have the backing of a university, something that makes it possible to do this work. For example, Toi Derricotte was able to do the thinking and planning for Cave Canem because she was part of the University of Pittsburgh and had some resources needed to launch it. Similarly, Furious Flower wouldn’t have happened if I wasn’t an administrator at James Madison University. If I had simply been a faculty member here, without a budget, I wouldn’t have been able to invite people on my own. It was the same for Nikki Giovanni who established the Steger Poetry Prize at Virginia Tech. And it happened for Carmen Gillespie, a poet and administrator who was at Bucknell University where she established the Griot Institute for the Study of Black Lives and Cultures and was able to pursue her work in Africana Studies. You don’t do these kinds of things without a financial base, unless you are independently wealthy. That’s a real issue.

DIVERSE: Talk more about the opportunities and challenges for poets that come with being inside or outside of the academy.

ALLEYNE: In the tradition of Gwendolyn Brooks, there are those Black poets who, for one reason or another, are also working and thriving outside of the academy. While significantly more poets are working and have careers in the academy, there are many others, like Anastacia-Renee Tolbert, who are doing this work in high schools, working in prisons, at non-profits, at poetry organizations, in the community. It’s amazing to see the proliferation of Black poets and what their careers can be. They have so many possibilities open to them in a way that they haven’t had before.

GABBIN: Looking back, I think what it would have been like if there wasn’t a kind of priming of the pump called the Furious Flower Conference. In 1994, and in the years since that first conference, this national forum and gathering place gave these poets an opportunity to be together and to know their strengths. They then went out and did amazing things. I see people who have now blown up, in terms of their careers. From then until now, there has been a burgeoning of Black poetry. As Black poets, we are not only in these academic centers and in prominent positions in colleges and universities, we are also winning the prizes like the National Book Award, the MacArthur Fellowship, the Guggenheim. But beyond that, we are national poet laureates. The highlight of the center’s 25th anniversary gala in September was the presence of four U.S. Poets Laureates, including the inaugural Youth Poet Laureate, who were all named in the past 25 years. All of them are Black women.

Cave Canem, the workshop for Black poets in the U.S., had its incubation in the Furious Flower Conference. I think that its founders Toi Derricotte and Cornelius Eady would agree. About a week after the first Furious Flower Conference, Toi Derricotte told me that young writers and poets were feeling isolated in some of these MFA programs. They were looking for a way to come together and they were looking for affirmation that the work that they were doing was important. She said we need to have a gathering place for them. So, two years later, came Cave Canem, which has had an amazing effect on the development and careers of many of the poets who are now winning major awards and prizes. 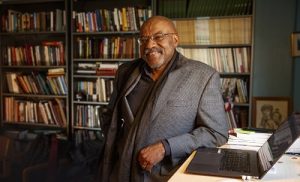 On “naming” yourself a poet: “I never said that I was a poet until I had about three or four books published. I was still struggling to call myself a poet, even after that. It was a ridiculous thing. That’s because I had elevated my idea of poets to such a high level. For me to even dare to say that I was a poet came at a cost, and at the time, I wasn’t ready to do that. There’s a sense of professionalism that comes with calling yourself a poet.”

Dr. Kwame Dawes is the Chancellor’s Professor of English and the Glenna Luschei Editor of “Prairie Schooner” at the University of Nebraska-Lincoln. Dawes is a 2019 Windham-Campbell Prize winner and the author of 21 books of poetry and author or editor of numerous other books of poetry, fiction, criticism, and essays. 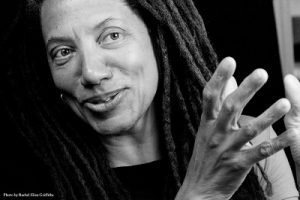 On a foot in both worlds — the academy and the community: “I had no plans to be in the academy. …. “I’m careful not to get sucked into the pleasures of the academy, the safety and secure dimensions of it. I feel like I walk the rim. I’m in it; I teach in it — I love teaching in it. But traveling is what keeps me in the community, keeps me talking to people who did or did not go to college, and keeps my communication muscles alive and working, and apart from that academic lingo.” (an excerpt from an interview with Kendra Hamilton/James Madison University.)

Nikky Finney is the John H. Bennett, Jr. Endowed Professor of Creative Writing and Southern Letters at the University of South Carolina, with appointments in both the Department of English Language and Literature and the African American Studies Program. She is a National Book Award winner and poet. 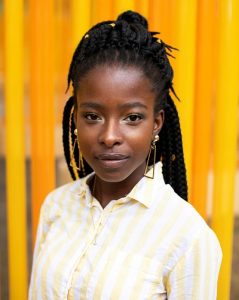 On plans for the future as a young adult poet: “English will always be my love, but I also felt coming into college that I had a lot more to learn. Sociology challenges me to continuously think about how my poetry fits into the broader fabric of a sociopolitical world — how can I enact change and empower others. And one of those ways is in my work as a writer, but also in my work as an activist and presidential hopeful.”

Amanda Gorman is the first-ever U.S. Youth Poet Laureate (2017-18). Gorman is a senior at Harvard University where she is in the top of her class studying sociology. An award-winning writer, Gorman published a poetry collection at 16. In 2016, she founded One Pen One Page, a not-for-profit community project that aims to close the literacy gap by empowering youth to be community leaders.