Representatives and senators gathered for the National Action Network Legislative Conference in the Hart Senate Office Building on Thursday to talk to constituents about policy issues impacting the Black community. 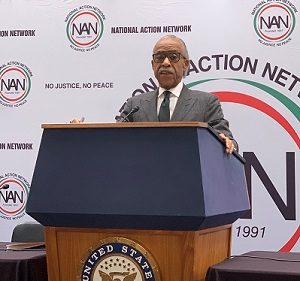 Policymakers addressed the crowd to prepare participants for their senator legislative meetings later in the day, advising them on legislation worth bringing to their senators’ attention.

Lawmakers “don’t know what their constituents want if we don’t bring it to them,” said the Rev. Al Sharpton, founder and president of the National Action Network. “That’s what today is all about.”

For the most part, higher education policy faded into background while issues like criminal justice reform, police brutality and gun control were brought to the fore.

On Thursday, there was also a sharp focus on President Donald J. Trump’s impeachment proceedings, which began on Wednesday.

Rep. Al Green, who has brought three articles of impeachment against Trump, told the room he did so because “racism emanates from the White House” and is “imbued” in Trump’s policies.

“I don’t want to manage racism,” he said. “I want to eliminate racism.”

Though Rep. Rashida Tlaib warned not to lose sight of the Trump administration’s proposed policies – from how housing discrimination is adjudicated to what questions are on the census – during his impeachment hearing.

Lawmakers not only aimed criticism at Trump but the conservative majority in the Senate for stalling legislation that would benefit Black communities. Sen. Jeff Merkley quipped that the House has a saying that “the Senate is where good House bills go to die,” and he advocated for a return to a simple majority vote.

Issues of representation, like voter suppression, loomed large at the conference, as well.

Merkley listed a series of state affronts to voter rights, like voter registrations put on hold in Georgia, early voting locations closed in North Carolina and disenfranchisement of felons in Florida.

He quoted the late Rep. Elijah Cummings, who said, “I will fight to death to ensure every citizen has a right to vote because it is the essence of our democracy.”

A panel also focused on the upcoming 2020 census, which many speakers chose to highlight as well.

Rep. Sheila Jackson-Lee emphasized that there needs to be “a mighty campaign” to ensure Black communities participate in the census in full force to ensure the appropriate amount of resources are allocated to their districts, for better infrastructure, public schools and more.

“You have got to be counted,” she said. “What would your ancestors say? Are you grabbing hold of your birthright? Are you demanding to be counted?”

She mentioned campus advocacy as a part of the solution, calling students “the beauty of our future.”

“Our college students need to be in the forefront of the census,” she said.

While higher education policy wasn’t ultimately a focus of the conference, it did receive some attention.

For example, in her speech, Sen. Kirsten Gillibrand, touched on the issue of student loan debt.

“Everyone in America loves their children,” she said. “People just want a decent education for their kids, to go to college without having to have a massive amount of debt, and they want better jobs.”

A former elementary school principal and school board member, Rep. Frederica Wilson called attention to what was going on “across the corner,” the Supreme Court oral arguments on the DACA program, or Deferred Action for Childhood Arrivals. She stressed that terminating DACA status would deport young people to places “where they don’t know the people … or some of them, the language where they came from.”

House Majority Whip Rep. Jim Clyburn spoke broadly about the need to make U.S. resources – like healthcare, education and others – equitably available to all communities.

“America has always been theoretically a great nation,” he said. “Our challenge is to make America’s greatness accessible and affordable by all of its citizens. You can have the best educational system. Does everyone have access to it? Can everyone afford it? If you cannot answer that question to the positive, you have a job to do.”

Experts Pushing for Diversification of Senior Staffs in U.S. Senate