Two well-known celebrities outlined new efforts underway through their individual foundations to improve the economic and educational outcomes for youngsters throughout the world.

Grammy award-winning sensation Shakira Mebarak, whose known simply by her first name, told the more than 3,000 delegates at the World Innovation Summit for Education (WISE) that her charity—The Barefoot Foundation—  has built schools in rural areas of her native Colombia, to provide learning opportunities for poor children.

“Most of you may know me as an artist, as an entertainer, and that’s indeed my calling and what I have been doing since I was 13-years-old,” said Mebarak who addressed the opening plenary on Thursday morning. “But I never would have imagined when I started out that my work as an artist would end up being the vehicle for me to serve my greater purpose in life of working toward eradicating poverty through the power of education.”

Too many children in Colombia, Mebarak said, are born into a society where “a few have a lot, a lot have almost nothing, and if you’re born poor, you will almost certainly die poor.” 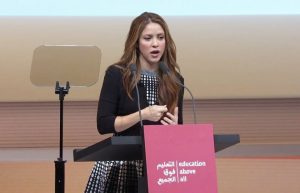 Too many individuals, she charged, do not have access to equal opportunities, “and because of that, generation after generation, after generation live trapped in the same vicious cycle fed by prejudice, and inaction,” she added.

As a youngster, Mebarak recounted watching many of her peers turn away from school because they lacked needed resources. She pledged that once she acquired wealth “the first thing I wanted to do was to invest as many resources as I could into what would later become the most meaningful project of my life, working for children,” she said, “to help right the wrongs that I had witnessed my entire childhood. ”

The “Hips Don’t Lie” singer said that “facts don’t lie and numbers show what an incredible return on investment a quality education provides,” she said.

Her appearance at the WISE Summit, now in its 10th year, was yet another indication of the organization’s global reach. In 2015, Michelle Obama addressed the Summit, which brings educators, policy makers and social activists to exchange ideas, experiences, and perspectives on what quality education is, what it means, and how it must sustain and evolve into the future.

“I really felt I needed to learn what the roots of inequality and low social mobility were,” said Mebarak, who added that she studied the reasons why so many children in Colombia faced a myriad problems.

“I realized that most of the issues children faced in my country, had and have a common denominator, the lack of access to quality education,” she said. “To me, it became crystal clear that education was the surest way to give all these kids the best fighting chance for improving their circumstances in life because education is the great equalizer.”

Her foundation has pledged to build new schools over the next three years and put programs in place to safeguard students from dropping out of school while helping to enroll the nearly 54,000 school-aged students who are currently not enrolled.

“Our work is far from being done,” said Mebarak. “Many, many developing countries are still rife with inequality and internal conflict. There are a lot of kids who still need to be reached. History is not only the past. History is being made everyday in the present.”

Meanwhile, Steven Van Zandt, a founding member of Bruce Springsteen’s E Street Band and an actor known for his role on “The Sopranos” launched the Rock and Roll Forever Foundation which was designed to advocate for the arts and to train teachers on how to use the arts to keep students engaged and in school.

“We want to give students tools that they can use and let them do their own creativity,” said Van Zandt, who is also known as “Little Steven.” He said that the newest initiative of the foundation called “Teach Rock” launched last year and currently engages with about 25,000 teachers across the world. The work is necessary, he said, particularly in light of the number of school districts, especially in the United States that have opted to slash art education programs.

His initiative brings musicians into the schools.

“Instead of dragging them to us, we go to them and we say, ‘who is your favorite artist?’ They will say Beyoncé and we trace it back to where Beyoncé comes from and we talk about Beyoncé being influenced by Aretha Franklin and we point out that Aretha Franklin comes from Detroit and we talk about the Black church and the civil rights movement and the kids are interested and they stay engaged because it’s a subject they’re interested in. So we go to them and suddenly they relax and hopefully they’ll take that energy into science and math and feel more comfortable with it.”

University of Oregon Professor Who Donned Blackface at Party Apologizes

Bill Proposed to Put Dropouts Back on Educational Path