“The Uncertain Fate of Hampshire College,” a headline in The Atlantic warned.

But after a financially rocky year, Hampshire College successfully renewed its accreditation.

The New England Commission of Higher Education, the college’s accrediting agency, voted to continue to accredit the private liberal arts school on Friday. 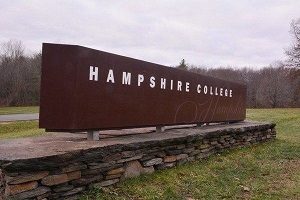 Commissioners lifted a warning notice on Hampshire College’s governing practices but maintained a notification on the school’s “institutional resources” to continue keeping a watchful eye on the college’s finances. In two years, December 2021, Hampshire College will have to submit a full progress report to reassure the accreditor of its financial sustainability.

Dr. Barbara Mistick, president of the National Association of Independent Colleges and Universities, said “this really represents a great pathway forward” for Hampshire College. “It’s definitely a signal they’re paying attention to the challenges and responding to the concerns of their accreditors.”

She sees the renewed accreditation as an example of the positive role accreditors can play in “protecting students and helping to improve the strength of the institution.” She understands the accreditation process as an opportunity for introspection and collaboration.

“You’re not in it by yourself,” Mistick said. “You’re really in it together and you have a team behind you that really helps you think about the answers and the right resolutions to your particular challenges.”

Hampshire College was at risk of having its accreditation put on probation because of financial troubles earlier this year, which led to former President Miriam Nelson’s resignation. The school discussed merging with another institution, and in February, the Hampshire College board of trustees at the time decided to admit a smaller than average class as an attempt to cut costs. But the board voted two months later to keep the college independent.

Last spring was a “challenging and chaotic time,” said Hampshire College President Dr. Edward Wingenbach, who began his role in August. But now he sees “a real sense of relief” on campus and new “enthusiasm and excitement” for what’s ahead.

In the coming years, Wingenbach wants to work on upping enrollment and continuing to enforce manageable budgets that keep the institution on solid financial ground.

Toward that end, the school is launching a fundraising initiative on Dec. 3 to raise $60 million in unrestricted operating support by 2024. The campaign has already raised $10.7 million.

Long known for its nontraditional curriculum, Hampshire College is also embracing a new academic model with the hope of attracting more students. The new structure continues in the school’s unorthodox tradition – famous for create-your-own majors – breaking down the school’s five interdisciplinary colleges in favor of a more integrated structure in fall 2020. 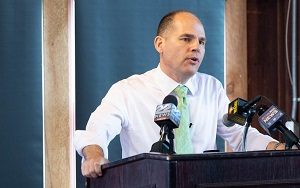 Next year, incoming students will have seminars centered around “the contemporary questions of our time,” Wingenbach said, instead of subject areas, taught by interdisciplinary teams of faculty. Wingenbach listed “global health,” “climate change” and “the vitality of the arts” as potential examples, though faculty are still working on their course offerings. Classes will also specifically focus on “entrepreneurial skills development.”

The school’s new approach resulted from repeated meetings with faculty, students, board members and staff to “recommit and re-envision what the core experience of Hampshire College should be,” Wingenbach said. And while it’s intended to “attract students and excite donors,” he also believes it will better prepare students for their post-college futures.

“When you think about the world that students will face when they leave college, it’s not going to be one divided by majors and disciplines,” he added. “It’ll be one where they will be asked to solve problems across boundaries, across all kinds of sources of knowledge and methodologies. They’ll have to grapple with tasks that haven’t yet been invented.”

Wingenbach expressed confidence that the new academic model will continue to attract the kinds of students who choose Hampshire College, bringing enrollment numbers up.

“The education we offer is really in demand,” Wingenbach said. “When you ask parents and students what they think a liberal arts education should be, they more often than not describe the kind of thing that Hampshire does: self-directed, project-centered, question-oriented, cross-disciplinary education.”

But Mistick is hopeful for the sector and sees Hampshire College as an example of independent colleges’ ongoing efforts to be “market-responsive” and “resilient.”

“If there’s a message for others, it’s to talk honestly about the challenges, and you’re better if you work together,” she said. “And that’s certainly been the case for Hampshire.”

Wingenbach’s advice to fellow liberal arts colleges is to ask two introspective questions: “What is it you do that is distinctive? And what resources can you count on in a predictable way?”

The biggest lesson he’s learned is to be “relentlessly honest with yourself as an institution about what is it you do that’s better than anybody else,” he said. And then “match your mission to your resources.”