North Carolina Gov. Roy Cooper said he wants to expand the Teaching Fellows program to every Historically Black College and University (HBCU) in the state, as part of a larger push to increase teacher diversity, according to a WRAL-TV report. Right now, the program — which provides loan forgiveness for STEM and special education teachers — is limited to five campuses, none of which are HBCUs. 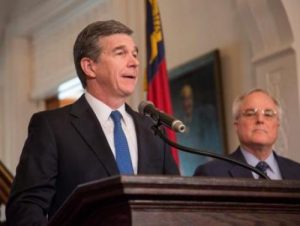 Cooper announced he would assemble a task force to tackle the issue during a symposium at North Carolina State University where roughly 300 educators, policymakers, school district officials, advocates and philanthropists gathered for the N.C. DRIVE Summit, an effort created to boost faculty diversity.

After his request for $1.8 million in diversity funding was lost amid a budget battle in the state legislature, Cooper said he hopes private dollars can help expand the reach of the Fellows Program, of which the majority of the beneficiaries are currently White females.