Sen. Lamar Alexander ceremoniously unfurled a printout of the FAFSA like a scroll, its final page resting on the floor.

He was speaking at a United Negro College Fund press conference yesterday morning, applauding the latest version of the FUTURE Act, a bill intended to renew $255 million in annual federal funding for minority serving institutions for two years. 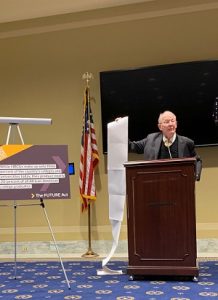 The new legislation, a bipartisan compromise, passed in the U.S. Senate last week – and passed in the U.S. House of Representatives yesterday afternoon with a 319 to 96 vote, followed by final unanimous approval in the Senate that evening. The amended bill passed the senate unanimously yesterday evening and now is headed to the White House and awaits the signature of President Trump.

The bill now comes with the FAFSA Act attached, which reduces the FAFSA by 22 questions and allows the Internal Revenue Service to directly share applicants’ tax information with the U.S. Department of Education. The money saved on administrative costs will go toward permanently extending $255 million in annual mandatory federal funds to minority serving institutions, including historically Black colleges and universities. Now that the bill has passed the House, policymakers hope it’ll be signed into law by President Donald J. Trump by the end of the month.

Alexander described the legislation as the ultimate “Christmas present” for America’s minority students.

This bipartisan compromise comes after Alexander stalled the FUTURE Act in the Senate, allowing the funds to expire on Sept. 30, with the hope of adding additional measures, including a simpler FAFSA. Senate Democrats resisted the additions, arguing it was a piecemeal approach to higher education reform that would hold up funding for historically Black colleges and universities and other minority serving institutions. But ultimately, Democratic Senators Doug Jones, Patty Murray and Chris Coons joined Republican Senators Tim Scott, Alexander and Richard Burr to hash out an agreement.

Jones, who introduced the original bill with Scott, emphasized that his colleagues’ “hearts were always in the right place.”

“With all that is going on in here, with all that’s happening in Washington D.C. and the divisions that you see every day, we came together,” Jones said. “Work still goes on, folks. The work of the United States still goes on, and people still care about the people in their communities.”

Rep. Alma Adams, who holds a doctorate, expressed Tuesday morning that the bill would pass the House and go to the president’s desk “without delay,” which it did.

The founder and co-chair of the first Congressional Bi-partisan HBCU Caucus, Adams earned her bachelor’s and master’s degrees at North Carolina Agricultural and Technical State University. She also served as a professor at Bennett College for 40 years.

Dr. Michael Lomax, president of the UNCF, stressed that investing in historically Black colleges and universities is an investment in STEM fields, given the emphasis these schools place on STEM education for minority students. He noted that HBCUs are trying to give students the skills they need to fill vacant STEM jobs in the United States.

Representatives of those institutions also spoke, highlighting the unique needs of their colleges and universities and how government funds can help.

American Indian Higher Education Consortium President and CEO Carrie Billy noted that federal funding makes things as simple as heated classrooms possible for tribal colleges “in some of the most rural and remote areas of this country,” in addition to student support services and new programming.

She described the FUTURE Act as “life-changing for our institutions and our students and our tribal nations,” while urging continued bipartisan work on a more comprehensive overhaul of higher education legislation.

Many minority serving institution leaders stressed the value of joint advocacy, not just for the FUTURE Act but as an ongoing strategy to support their students.

“We fought for this,” Lomax said. “We fought effectively for this. This fight is reflective of the way we’re going to operate going forward.”