Kentucky’s three law schools, which typically compete for prospective students, recently joined ranks in a new effort to increase diversity at all of their institutions. 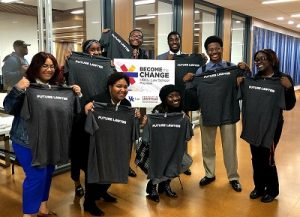 Participants in “Become the Change: HBCU Law School Preview” at the University of Kentucky College of Law.

Held at the UK law school in Lexington in late November, the first of what is planned as an annual event brought undergraduates from nearby historically Black institutions Central State University and Kentucky State, along with other schools to help the students navigate the application process and learn what lies ahead in law school and the legal profession.

Jimmi Nicholson, director of admissions at UK College of Law, organized the program with the help of a $3,000 Diversity Matters Grant from the Law School Admissions Council (LSAC). Nicholson said the idea of involving all three schools grew out of conversations with her counterparts at the other law schools.

The participants heard from alumni attorneys and current law students who served as speakers and panelists. One of the popular features of the program was a mock class conducted by Dr. Melynda J. Price, a law professor at UK. 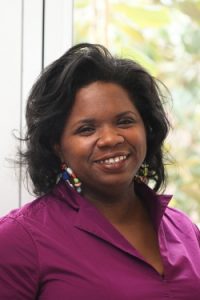 “I gave them readings, using the notes that I use in first-year tort and I asked them the same questions that I ask my students. It was great,” said Price, who graduated from Prairie View A&M, an HBCU, went on to earn a J.D. from the University of Texas and a Ph.D. in political science from the University of Michigan.

“More than anything, what students who are first generation, first in family, students from low-income backgrounds need is to be able to visualize themselves as participants in these [classes] and to know there is a place for them in these spaces.” Price is also director of the UK’s African American and Africana Studies Program. Price’s research focuses on race, gender and citizenship, the politics of punishment and the role of law in the politics of race and ethnicity.

Through the grant initiative, LSAC member law schools are encouraged to host events that motivate students who are underrepresented in the legal profession — including racial and ethnic groups, the LGBTQ community, individuals with disabilities, and indigenous Canadians — to consider law as a career.

Although the latest program was aimed at HBCU students, it was open to any interested undergraduates, and participants included White and Latino students.

Sidney Williams, an attorney and director of Central State University’s pre-law and pre-professional graduate programs, said the 10 students he accompanied from the Wilberforce, Ohio, campus to Lexington, found the presentations beneficial. “At least two of them have expressed interest in applying to the University of Kentucky law school,” Williams said, adding that the information provided at the law school preview supplemented his pre-law program by helping students understand critical topics related to attending law school including cost, student debt and bar passage rates.

“We were really happy with it. I couldn’t have asked for a better first effort,” Nicholson said, adding that she hopes to have more HBCU participation in the future and eventually reach out to other institutions in the region.