The University of California system was hit with a civil rights lawsuit last week over required standardized testing.

The plaintiffs – four students, six nonprofits and the Compton Unified School District – accused University of California regents of knowingly putting student of color and students with disabilities at a disadvantage by requiring the SAT or ACT from applicants. 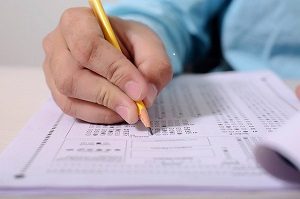 The argument presented in the case isn’t new. Advocates for college access have long questioned the value of standardized testing, and many view it as yet another barrier to higher education for underprivileged students.

College Board’s 2018 data shows 44% of White students scored above a 1200 on the SAT, compared to only 10% of Black students and 12% of Latinx students. An increasing number of schools have adopted test optional policies – 47 colleges and universities this year alone, according to a report by the National Center for Fair and Open Testing, or FairTest. About 1,060 colleges and universities now deemphasize testing in one way or another in the admissions process.

Bob Schaeffer, FairTest’s public education director called the SAT and ACT a “poor” predictor of undergraduate success and an “unfair gatekeeper” that blocks high education access for “many kids from historically disenfranchised backgrounds.”

“Because of differences in test scores by race and family income, kids who do well in high school but don’t have the advantages of well-to-do parents who can buy them test prep steroids that boost their scores are left behind,” he said, citing the “Varsity Blues” scandal as an extreme example. “The test becomes an unfair barrier to access for kids who could otherwise succeed.”

While Schaeffer and others have criticized required standardized testing for years, calling the SAT and ACT an illegal admissions requirement under California equal protection laws is a “unique and significant” move for the movement, he noted.

To some, the lawsuit may seem drastic. Supporters of the SAT and ACT argue that standardized testing can be reformed. But Schaeffer doesn’t buy it. He’s been working for FairTest since its founding 35 years ago, and he said he’s seen the industry try to change tests again and again. The SAT, for example, got rid of a penalty for wrong guesses and added and then removed a required writing section. But the test remains a “weak” forecaster of first-year grades and graduation rates, and the inequitable test scores continue.

Schaeffer hopes the University of California lawsuit will be a “tipping point,” leading more colleges and universities to shed the test requirement. The system has clout as “arguably the largest and most prestigious public university system in the country,” he said, and its original decision to adopt mandatory standardized test scores played a significant role in the nationalization of the SAT.

“Eliminating testing isn’t a silver bullet, but it’s a significant step forward and one that can easily be done,” he said.

Attorney Lisa Holder, of counsel at the Equal Justice Society, a racial justice organization that focuses on implicit bias across industries, noted that the lawsuit is part of a broader history of discrimination via testing.

“It’s not a novel issue because historically testing has been used as a gatekeeper for privilege, to maintain privilege for certain groups,” she said.

For her, the lawsuit is in the same continuum as legal challenges to poll tests in the Jim Crow South, which barred many African Americans from voting. She also pointed to a “whole slew” of civil rights cases in the late 20th century over biased professional tests, assessments for access to public service positions like police officers, postal workers or firemen.

“Obviously the SAT that we have a hundred years later has gone through many iterations and has evolved, but that is its derivation,” Holder said.

Now that the lawsuit has been filed, plaintiffs await the University of California’s response. Regents can object or try to have the case dismissed. But Holder is confident the lawsuit will move forward.

“Education is the great equalizer in this country, and if people of color, who have the experience of accumulated disadvantage, are not having access to a high-quality education system that’s publicly paid for, then we’ll never reach this goal of true equality,” she said. “We believe that our evidence of discrimination is so strong and so compelling and so galvanizing … that we will prevail and this test will be eliminated.”