As president of Talladega College, Dr. Billy C. Hawkins is known as a turnaround expert among higher education leaders. Now, as chair of the 37 presidents of United Negro College Fund (UNCF) institutions, Hawkins is sharing his turnaround skills with others.

When Hawkins, a Kent, Ohio native, arrived at Talladega in January 2008, he faced an immediate crisis. Enrollment on the 50-acre campus had shrunk to 280. And, in addition, the school was mired in debt, faced loss of its accreditation and the physical plant was in disrepair. Despite these obstacles, Hawkins saw promise. 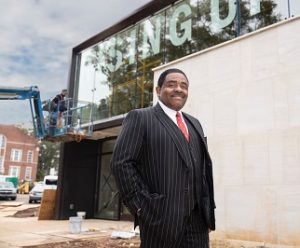 Coming of a successful revitalization of Texas College, which he piloted to regain its accreditation and increase enrollment by 82 percent, Hawkins was sought by boards of other struggling schools. He says he chose Talladega “because the institution, from its inception, always stood for academic excellence.”

He engaged in a vigorous outreach campaign seeking partnerships with local and state — public and private — entities that could assist in a physical makeover of the college. Some of the liaisons, especially the state prison, raised their eyebrows, but Hawkins persevered.

“I reached out to the city of Talladega and they became my partner,” says Hawkins. “I used volunteers from Honda — they have a volunteer program with their employees.  The state of Alabama has a work release program, so I formed a partnership with the prison system and told the warden we needed workers.”

The result was an eager crew assigned to do maintenance, groundskeeping, painting and other long-needed upkeep on the campus.

“In the 12 years I’ve been there, we’ve renovated every building on the campus,” he says. “People see it today and say it looks wonderful, and I couldn’t have done it without these workers — we don’t call them prisoners; we call them our community workers.”

The school provides two meals and transportation. Plus, Hawkins notes, when some have completed their sentences, they have been hired for jobs on the campus. “We believe we have helped in the rehabilitation of many of these men,” he says, adding that the college has saved an upwards of millions of dollars in personnel costs.

Soon after his arrival, in addition to making the campus more attractive, Hawkins announced reinstatement of athletic programs that had been dormant for 10 years.

Since he began the reinstatement, the college reports seven national championships. He arrived in January 2008 and by August of that year, enrollment had jumped from 280 to 511. As he added more courses and extra-curricular activities, the word spread that Talladega was back.

But with the many advancements came additional scrutiny from the media. Local reporters soon discovered that the highly-praised band director, Miguel Bonds, had a criminal record. Neither Bonds nor Hawkins commented on the conviction, and he remains Talladega’s director of bands.

However, the matter rose in the press again in 2017 when the band performed in Donald J. Trump’s inauguration parade, despite what Hawkins acknowledges was harsh criticism. A major crowdfunding effort to raise $75,000 for the trip to Washington netted more than $600,000 with help from conservative radio host Bill O’Reilly.

As many African-Americans were bristling over Trump’s numerous attacks of President Obama’s policies and the repeated lies about his citizenship, the sight of dozens of young African-Americans honoring Trump musically on Pennsylvania Avenue was more than some critics could bear.

“I’ll be honest,” Hawkins says, “some alumni wanted me fired. I had death threats at the time; there are still some alumni who won’t speak to me today because of that.” But Hawkins defends his decision, which he points out was supported by the board of trustees and by the students who participated.

Having survived that dust-up, Hawkins has continued his turnaround of Talladega. Enrollment is now 1,216 — in other words, it quadrupled in 12 years.

Enrollment isn’t Hawkins’ only focus, however. When he arrived, the school was on the verge of losing its accreditation with the Southern Association of Colleges and Schools (SACS), but with the board’s support, he was able to implement changes necessary to correct the cited deficiencies. This year Talladega received a 10-year accreditation that includes its recently established master’s program.

One of his most fruitful projects will be unveiled in January 2020. When he learned from appraisers that the huge Hale Woodruff Amistad murals that graced the school’s library were worth tens of millions of dollars, Hawkins raised money to have them restored. He was then able to convince Republican governor Kay Ivey to contribute $1.5 million in public funding to the construction of a museum to house the Amistad pieces along with other Woodruff murals, which are valued at $50 million.

The murals will be housed in the Dr. William R. Harvey Museum of Art on Talladega’s campus, named in honor of the Talladega alumnus and Hampton University president, who also donated $1 million to the project. A newly constructed student center — the college’s first — is also slated to open in January.

Hawkins’ role as a leading figure in higher education has expanded with his membership on the board of directors of the United Negro College Fund (UNCF), which supports private HBCUs, and with his position as chair of the organization’s 37 HBCU presidents.

Hawkins says he sees UNCF as a symbol of strength for private HBCUs.

“We’re working together as one strong unit — not in competition with each other — and that sends a much more powerful message than trying to act as an individual school,” Hawkins says. “We should be about helping each other and not losing schools, and that’s our focus at UNCF right now.”

He explained that the organization has expanded its accreditation committee to offer special assistance to schools facing accreditation-related challenges before the problems become severe.

UNCF recently commissioned a study to measure the economic impact its institutions have on their respective communities. Talladega College, for example, has a $17 million annual impact on its surrounding area, a figure Hawkins uses to encourage support from local and state officials.

Hawkins says the organization is experiencing bipartisan support for HBCUs on Capitol Hill under the leadership of Dr. Michael L. Lomax, UNCF’s president and CEO, as well as Lodriguez Murray, senior vice president for public policy and government affairs.

As leader of UNCF presidents, Hawkins has been courted by the Trump White House. Appointed by President Trump to the White House Board of Advisors on HBCUs in September 2018, Hawkins says he’s “been in Trump’s presence about four times since he took office.” One such occasion was this year’s widely publicized National HBCU Week Conference hosted by the White House Initiative on Historically Black Colleges.

“The ballroom was packed and he [Trump] was received very well. Great speech, and [we] were able to go behind the stage and greet him before he took the stage,” Hawkins says, noting that the President had been “nothing but pleasant” when he met with him.

“Here’s the reality,” Lomax quips. “News flash — Alabama’s a red state, it’s not a blue state, so if you’re the president of Talladega or Tuskegee or Miles or Oakwood you’re dealing with Republicans every day in your community and elective offices. Billy is very clear, he’s been very focused about what his goals are for Talladega and he’s looking for allies wherever he can find them.”