Over the past three years, Wake Forest University has focused on uncovering their connection and history with slavery through several ambitious initiatives.

Dr. Derek S. Hicks, associate professor of religion and culture in the Wake Forest School of Divinity, received a grant to help fund a trip for his African American Religious Experience class. 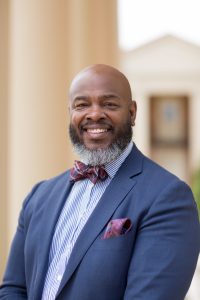 The class analyzes the broader history of African-Americans within the United States, highlighting issues related to race, oppression, law and social justice.

“I thought it might be a great idea to think through ways that I could connect the students with actually lived history, that relates to African American religious experience,” said Hicks.

Through a conversation with Sarah Soleim, manager of community and academic learning at the Wake Forest Historical Museum, Hicks was told that there was evidence of an enslaved persons chapel, known as the African Chapel, on the university’s original campus.

From 1834 to 1956, the school, known at the time as Wake Forest College, was originally located in Wake Forest, North Carolina. The chapel was comprised of and used by individuals who built and maintained the campus.

During the Civil War, the chapel was seized by confederate soldiers. However, after the war, the chapel continued to become a place of worship for those who still worked on campus, according to Hicks.

In 1956, the campus was moved to its current location in Winston Salem, North Carolina and renamed Wake Forest University.

“What a fascinating opportunity for my students to go to the original campus and try to walk in the steps of those who had helped build it,” said Hicks. “Those whose names largely get lost in a void because their accomplishments and their contributions weren’t documented in the same way that all of the founding presidents and builders of the universities were.”

Last November, Hicks planned a trip to the original campus as well as to the Friendship Chapel Baptist Church. The group of 21 students talked to the pastor of the church, toured the building and walked to the sacred burial ground.

Students were led through a path of trees, with the only signs being “no trespassing,” until eventually coming across the first set of headstones. Each tombstone was hand-carved, many were unnamed and instead had personalized carvings or etchings.

“What I found fascinating was getting in there, the air cooled,” said Hicks. “It got almost chillingly cold and yet the ground underneath my feet felt hot. So, you got this cold air, hot ground and what I noticed among the students, they were, in their own way, being filled by the space. The space was allowing them to discover new elements of themselves but also make connections with the souls who either labored there or were buried there.”

Lovelle McMichael, a first-year Master of Divinity student, had never been to a Black cemetery and was uncertain about what to expect.

“When we got there, it just made me start thinking about my ancestry in particular, because when I started looking at some of the dates on the headstones, it made me realize that this is not that far removed,” he said. 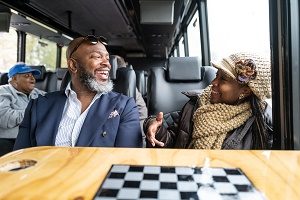 The students were then bused to the original campus and followed the path of what was believed to be the African chapel. At the end of the trip, there was a panel discussion with local community members from both the Friendship Baptist Church and Olive Branch Baptist Church who spoke about their experiences within the churches and ties to the university.

“It was a nice rounded day for the students to engage with history but also engage in contemporary conversations around the sustaining of the burial grounds and what it means to the African American community that these interconnected histories are told and preserved,” said Hicks.

Hicks was assisted by local poet Jacinta V. White who recently published, Resurrecting the Bones: Born from a Journey through African American Churches and Cemeteries in the Rural South. Her poems highlight her travels across the south and her visits to over 36 historic Black churches and burial grounds.

Prior to their trip, White led an hour and a half workshop for the students to better understand her creative process. Students wrote short stories and poems after the trip to document their experience.

“This is exactly the kind of thing, the kind of enrichment and opportunity that we want for our students through the Slavery, Race and Memory project,” said Chavis. “It really can provide a present-day connection to the historical underpinning of the university. It’s really important for them to go back and see the original campus and think about it in that context.”

At the end of his experience, McMichael left with a greater appreciation of his heritage.

Harvard Taking More Steps to Acknowledge its Ties to Slavery

Bishop Opposes Notre Dame’s Decision to Give Medal to Biden