After learning to dance at five years old, Patsy Collins Bandes dreamed of being a ballerina.

Her plans eventually changed after she sustained an injury in high school. However, she quickly found her passion in theater while performing in plays at school. She went on to earn her bachelor’s degree in theater with an emphasis in directing from the University of Northern Colorado.

“It’s really been home since I was a kid, the arts and the stage,” said Collins Bandes, who is the new chair of theater at Boston Conservatory at Berklee.

After graduation, she joined Playhouse on the Square in Memphis, Tennessee. A year and a half later, she returned to her hometown of Denver, where she balanced working at the Denver Center Theater Company, the National Theater Conservatory and freelance projects.

One of her most memorable plays was working on “The Laramie Project” at the Denver theater. The story followed the murder of University of Wyoming gay student Matthew Shepard and its aftermath.

“Walking into that theater with the original artists, where many of those people who were portrayed on stage came to see it, was incredibly powerful,” said Collins Bandes.

After seven years in Denver, she moved to Massachusetts to become a production stage manager at the Boston Conservatory at Berklee in 2004. 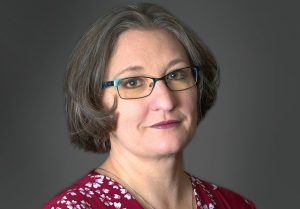 Once she had children, however, Collins Bandes found the work to be unsustainable and believed that a career in higher education would provide more stability.

“I could not work every night and every weekend and have two kids and actually see them,” she said.

In 2006, she joined the theater and dance faculty at the Conservatory.

Throughout her time at the Conservatory, Collins Bandes has directed 11 productions and stage managed over 100.

Last month, she was named chair of theater at the Conservatory after previously serving in the interim position.

“Students who come here are incredibly driven, they are passionate, they are willing to be in class from five in the morning to seven at night and then go to four hours of rehearsal after that,” she said. “That kind of energy is really invigorating.”

In addition to her role as chair, Collins Bandes is currently earning her master’s degree in liberal arts through the Harvard Extension School. All of her coursework is completed and she is in the process of writing her thesis on superstitions within the theater industry.

“I have always been interested in the origins of superstition,” she said. “Of why we say ‘break a leg.’ Why is it bad luck to have peacock feathers on stage? There were actual reasons, it’s not just because someone thought it was a good idea to say that and it just kind of stuck.”

As chair, Collins Bandes wants to establish a working environment where diversity and equity are embraced.

As a woman, she has found some aspects of the theater industry to be challenging. In some instances, Collins Bandes has faced harassment from male colleagues.

“Discounting our value, our ability to do our jobs because we are women,” she added. “Because we are parents. ‘Oh, she can’t do that because she has a baby, those kinds of things.’”

She is encouraged however, by the recent shift in the industry.

“I see more and more women both in theater and higher education who are starting to break through that and starting to turn and reach behind them and help other women up to where they are,” she said. “And that is how I ended up where I am.”

Her efforts to create a more diverse work environment began during her time as interim dean. Along with colleagues, a series of shows were produced that was entirely written by women and people of color. An evaluation also was done on all of the shows that were performed at the Conservatory and it was discovered that 95% had been written by White men.

Chicago State Backs Off Request that Employees Turn in Keys

Some Southern Cal Faculty Departments Vote for Union, Others Reject