Long known for its lack of majors and its “integrated, team-taught” educational approach, Evergreen State College in Olympia, Washington is certainly not your parents’ college.

Even a cursory look at the student bookstore illustrates that difference. Supplies like pencils, notebooks and art materials jostle for space with hair dyes in flamboyant, au courant colors, and a kiosk just outside the store advertises organic, free trade coffee. Add to that the college’s salubrious environs – it’s surrounded by lush forest – and the institution is a certain kind of boho freshman’s dream.

But, these attractions notwithstanding, the small, public liberal arts school has been a little quiet over the past couple of years. 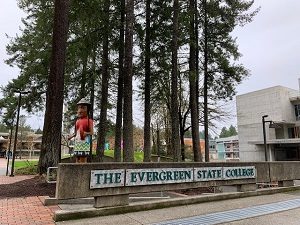 Like many colleges of its kind, it’s been facing declining enrollment, yes, but it has seen a particularly steep 27% drop since 2017. The timing of the dip likely isn’t a coincidence. Two years ago, racial tensions led to student protests that shut campus for several days.

Evergreen has since been trying to enact new initiatives to up enrollment and alleviate the concerns of students of color. The incidents of two years ago are now colloquially referred to by administrators as the “needs assessment of 2017.”

Nearly 80% of Evergreen’s student body identifies as underrepresented. According to The Seattle Times, about 38% of freshmen receive federal Pell grants, which are for low-income students, and some 17% students are Black, Latino or Native American.

After the 2017 incident, “the college’s reputation took a hit,” said Evergreen’s academic dean Dr. Trevor Speller. “We developed a certain profile in the mainstream press, but especially in the right-wing press, about who we were and what our values were. I think that really did affect student enrollment. It’s been tough.”

What happened back then was that a professor, Dr. Bret Weinstein, came out against a change to the school’s Day of Absence. Traditionally, on this day, students of color leave campus to discuss diversity and equity issues. They also leave to demonstrate what campus would be like without them. That year, the event’s planners decided to change things and asked that White students voluntarily leave campus to talk about race issues.

Weinstein vocally objected, students wanted him fired and the episode lead to heated protests and a campus shutdown. Videos of the protests went viral online, and the incident polarized commentators – those observers against the protest said it was campus activism gone wrong – and students. 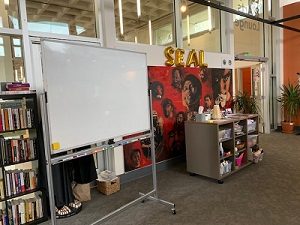 Whatever it was, it hit enrollments badly and Evergreen needed to do something and do it fast.

“For a long time, students have been telling us in different ways that they need more than what they’re getting in terms of support,” said Cholee Gladney, associate director of academic and career advising. “It was a way for students to tell us what they were needing.”

In 2017 itself, Evergreen created a separate Inclusive Excellence office in response to the protests, said Gladney, herself a first-generation student at Evergreen.

“Creating that division has helped us focus in more on the equity that we all knew was in our work but to be more intentional about how we think about serving students from underrepresented backgrounds,” she said.

A year later, the school also created the Student Equity and Arts Lounge, a hangout spot for students with workshops and programs related to diversity, equity and inclusion. For example, the lounge hosts a pop-up, a gender-affirming closet where trans students can comfortably shop for clothes consistent with their gender identity.

This year, Evergreen is preparing for two major changes meant to enroll and retain more students, particularly underrepresented ones. Speller calls it “a moment of unprecedented change, which is by turns exciting and terrifying.”

The first is a new educational model which will offer students “paths of study,” which are essentially guides for Evergreen students that help with what classes to take toward a specific career goal. “Lighting up certain trees in the forest to see the way out” toward their desired outcomes, is how Speller described it.

The second initiative arose from the answer to the question, “Who can we bring to Evergreen that isn’t currently choosing us?” While many students love the freedom of Evergreen’s pedagogical model, they found that potential recruits may want a more structured option.

“I think it’s incumbent on us to show them ways to move through the institution,” Speller said.

To that end, the school is introducing Greener Foundations, a new student success program for freshmen, which piloted this fall. The goal is to boost retention, particularly for students from underrepresented backgrounds. The program is incorporated into the courses students are already taking, providing about two hours of instruction a week on study skills, health and wellness, financial literacy, career goals and more.

“We wanted to help them navigate college, navigate Evergreen in particular, because Evergreen is unusual,” Speller said. “We help students reflect on their identities, who they are and what they want to achieve.”

While the program has been in the works since 2016, before the bulk of the enrollment drop, Speller described it as a “well-timed” retention tool for freshmen.

Hannah Simonetti, director of First Peoples Multicultural, Trans, and Queer Support Services, pointed out that many of the students who choose Evergreen State College are there because traditional educational models haven’t served them. Students of color are still carrying “baggage” from 2017 and prior experiences in educational institutions, but “a great many people are trying to push forward in doing good equity work on campus.”

“Education has failed a lot of our students,” Simonetti said. “Those students are coming here because they desperately hope that Evergreen will serve them differently. …Evergreen is that hope for them.”

Where are the Black Men on Campus?