Dr. Apryl Alexander aspired to become a veterinarian upon starting her college career at Virginia Tech.

However, after engaging in volunteer work at the women’s resource center near campus — where she learned about the prevalence of violence, interpersonal violence and the impact of violence — Alexander switched majors to psychology. She then went on to earn her master’s degree from Radford University in clinical psychology.

After receiving her doctorate from the Florida Institute of Technology, Alexander held a fellowship at the Minnesota State Operated Forensic Services, where she trained within the forensic psychology field.

She eventually fell into academia after finding a position at Auburn University. There, Alexander became a clinical assistant 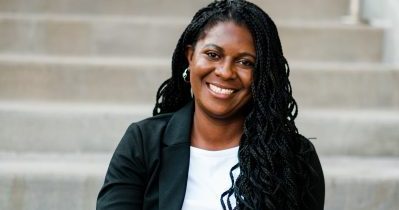 professor at the university and oversaw research within a treatment program, which worked with adolescents who had committed sexual offenses.

“This is work I’ve been wanting to do for years in noticing that some of the adolescent victims that I had worked with went on to engage in perpetration themselves,” says Alexander.

After working at Auburn for three years, Alexander began looking for a new position. She wanted a space where she could become more involved in advocacy and public policy work.

Alexander eventually became clinical assistant professor at the University of Denver, teaching within the Masters of Forensic Psychology program in the Graduate School of Professional Psychology.

“One of the things that does drive me is seeing the success of my students afterwards, seeing them engage with the materials,” says Alexander.

Alexander began her research by focusing on individuals who had experienced various levels of trauma such as sexual assault, abuse, neighborhood violence or natural disasters. She studied how those violent incidents impacted them.

“Thinking about what the long-term implications are of that and then how we build better systems to address this violence and violence prevention,” she says.

The subjects of her research were originally college students and individuals within the community. However, her research has since expanded to juvenile offenders.

“Not one person can do all this work,” says Alexander. “It’s going to take a village; it’s going to take a team. Knowing that we are training the next generation of researchers, scholars, clinicians and advocates is something that is so rewarding to my work.”

In addition to academia, Alexander co-founded and served as co-director for the University of Denver’s Prison Arts Initiative, which provides creative arts programs to incarcerated individuals within Colorado state prisons.

Throughout her career, Alexander has enjoyed seeing how her work has created a larger impact.

“It’s not all these peer-reviewed articles that are important,” says Alexander. “I don’t want my research to sit on a shelf, I want my research to change things. I think that public impact fulfills me and thinking about the long-term effects on society.”

In terms of future career goals, she hopes to continue building her current juvenile justice system research and plans to expand it to include prevention methods such as offering education or mental support systems.

She will also look at the influence of popular culture and its impact on psychology, including how individuals engage with it in terms of mental health issues and disparities within underrepresented populations.

Title: Clinical Assistant Professor at the Graduate School of Professional Psychology at the University of Denver

Words of wisdom/advice for new faculty members: “Just think about self-care and what that looks like in your early career. Knowing that you are going to have to find support, find a team, lean on mentors that you’ve had who brought you along the way and find new ones. I think that’s the most important part.”