To grasp the size of materials Dr. Oscar Vazquez-Mena studies, divide a millimeter — about the width of a dime — by 1,000. You’ll arrive at a micrometer, a unit roughly the size of bacteria. But don’t stop there; divide by another 1,000 and, finally, you reach Vazquez-Mena’s specialty: the nanometer.

Vazquez-Mena is assistant professor of nanoengineering at the University of California, San Diego (UCSD) whose research has applications in the energy and health sectors. He’s currently improving sources of sustainable energy by creating conductive materials significantly smaller than solar panels used today.

“What I’m doing is making a mini sandwich,” says Vazquez-Mena. “My bread is graphene [a structure that is one atom thick] and my meat is quantum dots [a type of nanoparticle], so now I have a material that is a very good light absorber and a very good electrical conductor.” 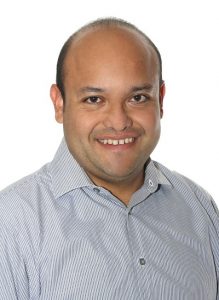 He’s also developing new techniques to see inside the brain. If the technology works, he says, doctors could diagnose brain disorders earlier and potentially perform surgeries without opening the skull.

“What we’re trying to do is build metamaterials that would allow ultrasound to go through the skull which would change a lot in neurology and neuroscience,” Vazquez-Mena said.

But Vazquez-Mena is not limited to the lab — he also helps improve college access for Hispanic and Latinx students. While at UC Berkeley, for instance, he founded the Indigenous Pipeline Program.

The program’s origin stretches back to when he was a middle schooler taking a required Aztec dance class. The class didn’t impact him then, but years later, while walking through Berkeley’s campus, Vazquez-Mena recognized its sound.

“I heard drums and I didn’t have any doubt. It was the same rhythm, the same drums I heard in middle school,” he said.

Before he knew it, Vazquez-Mena began participating in Aztec dance again and, in doing so, met indigenous children and young adults who were born in the U.S. or migrated to the U.S. at a young age.

“[These kids] would tell me what they were doing with math and physics in school and, for me, these kids were like geniuses,” says Vazquez-Mena. “But … they didn’t have the vision of going to college. Some of them said it was too expensive, that they were not smart enough, that they were going to work with their parents.”

From his days growing up in Chiapas — one of Mexico’s poorest states — Vazquez-Mena understood how indigenous communities lack educational opportunities and face discrimination. To help, he created the pipeline program, which provides academic mentoring and support for Nahua/Mesoamerican children.

In addition, he recently started the Bridges to Education program to assist U.S. citizens in Mexico whose parents have been deported. Each day, many of these students cross the border to complete their college degrees in the U.S.

“What I admire the most is his fearlessness in engaging and connecting with extremely difficult populations with respect to getting them into college,” said Dr. Olivia A. Graeve, a professor of mechanical and aerospace engineering at UCSD. Also from Mexico, Graeve and Vazquez-Mena share a close friendship.

However, according to one of his former students, it’s not difficult to befriend Vazquez-Mena.

“He’s very much a happy-go-lucky person,” Malcom Lockett, who did research under Vazquez-Mena, says. “You can talk to him about almost anything.”

“Just seeing how much Dr. Vazquez-Mena has accomplished in his time really fires them up to get into college or graduate school,” said Lockett.

But he’s not the only mentor they can look up to. Vazquez-Mena said he loves to remind indigenous children that their ancestors, the Mayans, were mathematicians and scientists who followed celestial bodies with exceptional accuracy and created the most sophisticated mathematical system in the Americas.

“Sometimes if you know that your parents or your ancestors were good at something, I think that gives you self confidence that you can also do it,” says Vazquez-Mena.

In the future, Vazquez-Mena hopes to continue his work with Latinx and Hispanic students while broadening his research by studying how nanotechnology applies to artificial intelligence.

“I have been doing more with diversity and outreach than what is expected,” says Vazquez-Mena. “But for me, doing outreach with the Hispanic communities is like going home.”

Words of wisdom/advice for new faculty members: “Mistakes are the best opportunity to learn.”