As Dr. Cathy Wong tells it, she “stumbled” into her career in academia after she walked into a lab and saw how colorful the lasers were.

“I thought this could be really fun,” says Wong, who uses lasers to study how material interacts with light and solar cells. Her research, which uses physical chemistry to research material synthesis, has longstanding implications, including responding to the world’s energy crisis. 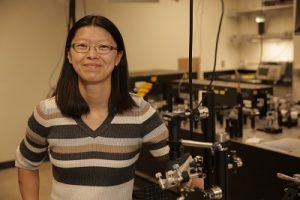 As an assistant professor in the Department of Chemistry and Biochemistry at the University of Oregon, Wong spends much of her time helping undergraduate juniors and seniors as well as graduate students develop  passion for scientific research.

Having grown up in Toronto where ethnic differences are often celebrated, embracing diversity has been a hallmark of Wong’s career. Unlike her hometown, the city of Eugene, where the University of Oregon is situated, is less racially diverse, meaning that Wong — who hopes to come up for tenure in a little less than two years — has made it her priority to help students develop a sense of belonging and connection to the university.

In the classroom, Wong’s work largely focuses on helping design physical chemistry labs and teaching students how to build microscopes and write lab reports — skills she says will prove useful in their future careers.

Though she works with science majors, she teaches a section of physical chemistry that requires heavy math skills that often create anxiety among her students.

“Some are apprehensive,” she says. “I reassure them, ‘you can do it even if it is complicated and overwhelming.’”

Clarity, Wong says, is essential to teaching in the sciences.

“My philosophy of teaching and communication about science in general is not just to sound smart but to be as clear as possible, even if that means simplifying sometimes,” she says. “This way you bring everyone along and everyone can be engaged.”

In this regard, Wong has been lauded for her teaching and research. Last year, she was named the recipient of a Career Award by the National Science Foundation. These awards are given to support early career faculty who have the potential to serve as academic role models in research and education and to lead advances in the mission of their department or organization.

Those who know her say that Wong has been a leader in working tirelessly to increase the diversity of the graduate student population within a state that is itself not racially diverse.

Wong currently serves as the faculty sponsor for a student group, Community for Minorities in STEM (CMiS), that aims to retain students in racial minority groups. This group organizes social and professional development activities that aim to foster community among underrepresented graduate students, battle imposter syndrome and improve retention rates.

“By giving the undergraduate students an example of a near-peer who has succeeded in graduate school, the program aims to inspire more underrepresented minority undergraduates to pursue graduate studies,” says Dr. Naomi Ginsberg, an associate professor of chemistry at the UC Berkeley and one of Wong’s career mentors. “The program has been highly effective in increasing the number of applicants to the graduate program at UO from underrepresented groups.”

Wong says that she has enjoyed her time in the classroom and that her understanding of the academy has evolved over time.

“When I started out, I had no idea how universities really worked,” she says with a laugh. “Now that I’ve been here, I see that there are great opportunities to have a voice and help to effect change.”

Title: Assistant Professor in the Department of Chemistry and Biochemistry at the University of Oregon

Words of wisdom/advice for new faculty members: “You’re going to be asked to do a lot of things and it’s important to say no to some and reserve the time for those things that you really care about and that matters most to you and your department. Also, seek out career mentors who can help guide you along the way.”

Recruitment and Retention Key in Diversifying Faculty at Public Schools