On March 31, 1961, the Rev. Dr. Martin Luther King Jr. preached what would be his last Sunday sermon, titled “Remaining Awake Through a Great Revolution,” at the pulpit of the historic and grand Washington National Cathedral in the nation’s capital. Before an overflow crowd, then the largest to gather at the Cathedral, King revealed his plan for the Poor People’s Campaign and declared “eleven o’clock on Sunday morning … the most segregated hour in America.”

For more than a century, this American Cathedral of the Episcopal Church has bookended the lives and tenures of U.S. presidents. It has served as the venue for state funerals and memorial services, and beginning with George Washington, it has been the place where presidents gather for prayer on inauguration day.

And for the first time, on Sunday, Feb. 16, this cathedral will host alumni, students, organizations, families and community representing the nation’s historically Black colleges and universities (HBCUs) at its 11:15 a.m. worship service and Eucharist. Morgan State University Choir will be presenting during the service. 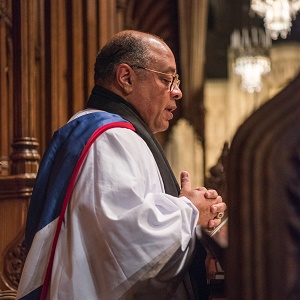 “We’re looking forward to this unique celebration and worship Sunday,” said the Rev. Canon Leonard L. Hamlin Sr., who had the idea to invite the HBCU community to the National Cathedral, a place he calls “convening and welcoming.”

On Feb. 16, Hamlin, who has three degrees from Howard, can expect to see, represented in the cathedral pews, his alma mater as well as his Omega Psi Phi fraternity brothers donning their signature purple and gold.

“This is a national invitation to the HBCU community and to the institutions which have contributed so much to individual lives, to the community and to this country,” Hamlin said. There are more than 100 HBCUs in the U.S. and most were established in the South just before and after the Civil War, often with the support of Christian organizations and denominations.

Hamlin would like to see HBCU Sunday at the cathedral become an annual occasion. He has organized several national events, partnerships and outreach efforts in his new role as Canon Missioner.

Hamlin began his tenure at the cathedral in April 2018. Previously, he served for 22 years as the pastor of Macedonia Baptist Church in Arlington, Virginia.