U of Central Florida Provides Mentorship for Male Minorities

To address the low retention and graduation rates of male African American and Hispanic students at the University of Central Florida (UCF), Wayne Jackson developed the Brother to Brother (B2B) program.

Since its establishment in 2008, B2B has provided academic and on-campus support to male students of color through workshops and events.

“[B2B] brings guys together to help them understand the importance of education but also to begin to help them realize the opportunities that were out there for them so that they could be successful,” says Jackson, director of Multicultural Academic and Support Services (MASS) at UCF. 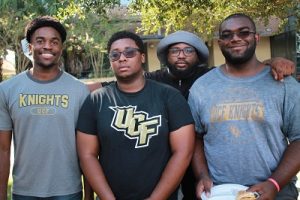 At predominantly White institutions, Jackson says that minority students should know there are support systems as well as a place for them on campus.

“One of the things that we believe about our program is that in order to be successful, students really have to have a sense of belonging on campus so our job was to help them understand that they have a place that they could come to,” he adds.

At the start of the program, B2B hosted speakers on campus, and students were given the opportunity to attend conferences including the National Black Student Leadership Development Conference in Washington, D.C.

However, B2B has since progressed from a program that builds a sense of belonging and identity to developing students more holistically, according to Dr. Jeremy Jones, coordinator of MASS at UCF.

Originally focused on helping Black and Hispanic students, B2B has expanded to include Pacific Islander, Native American and multi-racial males.

Under the umbrella of the B2B program, the Collegiate Male Institute was established, which follows a five-pillar system that aims to support students outside of the classroom. The pillars include academic skill building, mentorship, leadership development, career readiness and social justice/advocacy.

Once initiated, Collegiate Male Institute members can be spotted on campus wearing maroon ties. To promote the group, there are student ambassadors who wear maroon blazers with the program’s emblem.

Plus, students can learn about the program through social media such as Facebook, Instagram and GroupMe. At the beginning of the year, newsletters are sent out to students inviting them to get involved.

B2B also offers incentives for students to join. Those who attend a certain number of workshops or career service meetings, edit their resumes, hold at least a 2.7 GPA and write an essay can qualify for scholarships.

In collaboration with the university’s career services, B2B hosts a networking reception. Employers are invited to the university to specifically talk with B2B students. There also opportunities to participate in mock interviews.

“The networking part of college is key,” says Jackson. “Many times we don’t talk about that. We talk more about making sure they get the grades and that’s not to say that grades aren’t important because grades are very important. But we also want them to know that, along with the grades, they also need to network.”

Though the program’s foundation stays relatively consistent by semester, events and resources change after receiving student feedback each year. For example, B2B plans to implement a meal etiquette course to cater to job interviews over lunch. Students would learn how to keep the conversation going and be attentive to the interviewer throughout the whole meal.

“Going to school is only theory but the experiences that they have are just those steps along the way to be truly successful and marketable,” says Jones. “So once they get their resume critiqued, they have intangible, marketable things on their resume that they can actually talk about it.”

At a large school like UCF with 68,500 students, sophomore Alexander Dorsey-Tarpley says it was easy to just become a number. However, after receiving Jones as a faculty advisor, Dorsey-Tarpley learned of several resources necessary for a strong start to college.

In addition to resources, Dorsey-Tarpley says that the program offers students the opportunity to discuss topics that aren’t always brought up with relatives, significant others or friends, such as the idea of toxic masculinity.

“It provides a community of brotherhood that you can join so that you can really get to know yourself and find a community with likeminded people,” he says. “Even people who are not like you but are willing to support you in the long run.”

For many of the male students, some barriers include the overall time commitment as well as limited access to 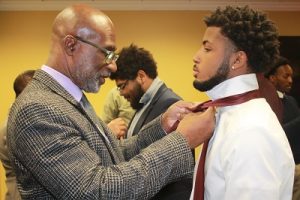 UCF Assistant Vice President A.J. Range presents a tie to Alexander Dorsey-Tarpley, who is being honored during a Men in Maroon event.

“We see a lot of first-generation, multicultural or rural area students not having enough time to balance working life, personal life and academic life, and they still want to be a part of our program,” said Jackson. “We are trying to find different ways for the information to get to them.”

Jones says he often finds that students struggle to reach out and ask for help from either a peer or professor. To combat that, B2B offers opportunities for students to meet with faculty members for lunch and develop more personal relationships, leading to connections.

Jones also established a retention committee consisting of  upperclassmen students and faculty from housing, residence life, teaching, the writing center, office of financial assistance and career services. The group meets once or twice a semester to discuss ideas to ensure student success. For instance, the group has discussed implementing more mental health counseling as well as opportunities for study abroad scholarships.

Jackson compares the program to building a house.

“If you build a house on a strong foundation, that house will stand,” he says. “If you build it on a weak foundation, then it will eventually fall apart. So what we try to do specifically with our first-year students is to try to help them develop a strong foundation so that whether they are with us or whether they are not with us, they can still be successful here at the university and then begin to prepare themselves.”

In the future, B2B will focus on helping students of color travel more, domestically and abroad. This year, some students will be attending a conference at the University of Akron in Ohio.

Jackson says that, for many students, attending the conference will be the first time they leave the state of Florida or fly on an airplane.

“I always tell students there is oxygen outside the state of Florida,” he says. “So providing students the opportunity not only to get out of the state but to network with other students such as themselves, they can begin to expand that network which could possibly help them in their future.”

Additionally, there are plans to establish a living and learning community. The cohort of students would take general education or leadership classes together during their first semester of school.

“We are fortunate that we have some great students,” says Jackson. “They help us; they provide us with insight to really help us make it even stronger. We are excited about the future because we think we have one of the best programs in the country.”