But rather than investing resources into recruiting minority students or researching why so few Black students pursue environmental science, many university departments fall victim to a long-held and problematic assumption.

“If you asked the question or polled a hundred departments, the number one response would be ‘people of color are just not interested in the environment,’” says Dr. Dorceta Taylor, professor of environmental justice and environmental sociology at the University of Michigan’s School of Environment and Sustainability.

Though Taylor calls it “a complete farce,” the stereotype that Black people aren’t as interested in environmental issues as White people persists in the public’s imagination. 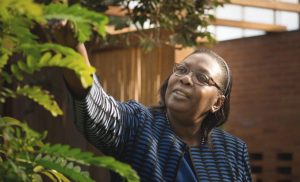 non-Whites underestimated the environmental concerns held by minorities and associated the term “environmentalist” with a White face.

Yet, the irony is that, despite being perceived as the least environmentally concerned, all minority groups surveyed — African Americans, Latinxs, Asians and Native Americans — self-reported higher environmental concern than the White people surveyed in the same study. And despite the White image associated with American environmentalism, the most pro-environmental voting bloc in the United States is consistently the Congressional Black Caucus.

What’s more, race, more than class, is the number one indicator of how vulnerable someone is to climate change, according to a 2018 Environmental Protection Agency (EPA) report, which found that Black people are exposed to 1.5 times more particulate matter than White people and that Black children’s rates of heart disease and asthma are double those of White children. Environmental racism, the study concluded, is real.

Given these findings, it’s no surprise that minorities report higher concern for environmental issues. Or, as Taylor puts it: “They get it. They see the smokestacks; they see their kids dying of asthma. Nobody has to tell them that the climate is changing.”

Why then, does the environmental science field remain so White? According to Taylor, many factors, present and historical, are at play.

“The biggest barrier is the cost,” says Taylor. “College is expensive and graduate school is even more expensive, so if there are no environmental fellowships, then that becomes a barrier as opposed to ‘Wow, an entire race is not interested in this.’”

Though all college degrees are expensive, Taylor says cost particularly affects environmental studies because many minority students don’t see it as a field in which they can find a job and, thus, not worth the investment.

And, unfortunately, their assumption isn’t entirely wrong, according to Taylor’s 2014 Green 2.0 report, which found that minorities were profoundly underrepresented in environmental organizations and nonprofits. Whereas 40% of staff and 17% of executives in the tech sector were people of color, only 25% of staff and 4% of senior staff in environmental foundations identified as people of color.

“It’s racism,” says Taylor. “But because not everyone subscribes to racist ideology, it’s also unconscious bias and stereotyping.”

Perhaps another reason Black students are less likely to pursue the field is because the curriculum doesn’t center environmental issues that are pertinent to communities of color, such as increasing public access to open green space, rerouting major interstates out of minority neighborhoods and reducing the disproportionate number of toxic waste facilities in minority communities, argues Wanjiku “Wawa” Gatheru. 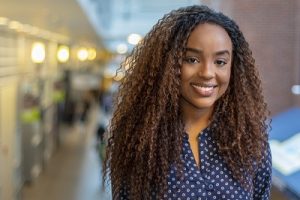 Gatheru, an environmental science major at the University of Connecticut, is the institution’s first Rhodes Scholarship recipient. At Oxford University, Gatheru plans to pursue a graduate degree in nature, society and environmental governance.

“Black and Brown people experience environmental hazards and crises first and worst but are not the ones in the environmental fields making the decisions that are going to mitigate these issues,” says Gatheru.

Yet, growing up, Gatheru said she never saw herself as an environmentalist. In her mind, environmentalists seemed as though they were White people who went camping and rock climbing and who advocated solely for wilderness and wildlife preservation.

It wasn’t until high school when she discovered the environmental justice movement — born in the 1990s as a critique of the mainstream American conservation movement — and took an interest in the field.

Even when students of color do pursue environmental studies, they may find it difficult to stay in the field due to subtle and overt instances of racism. For Gatheru, it may be as subtle as a person’s surprise when they discover her major. Or for Taylor, it may be as overt as the receptionist who wouldn’t allow her to check into the conference for which she was the keynote speaker.

“For some students, it can be very stressful,” says Taylor. “Your colleagues don’t know or they just aren’t in a position to be very helpful when that’s happening, so you tend to be very alone with those experiences and so that really makes it very difficult for some young people when they go into these organizations or academic departments to actually stay.”

Gatheru, for instance, says she has questioned her place in environmental studies several times.

“To be in a field where your narrative is nowhere and no one looks like you, you feel incredibly alone,” says Gatheru. “There have been many times that I’ve questioned myself as to why I want to be in this field and have thought about leaving. But it’s exactly those thoughts … that reaffirm why I need to be there.”

Being a part of the Doris Duke Conservation Scholars’ Program has helped Gatheru with feelings of isolation, as the program unites underrepresented students across the nation through its two-year, summer-long experiential learning opportunities offered at five different campuses. Taylor leads the program at the University of Michigan’s campus.

But while the program and similar ones certainly improve diversity in environmental studies, Taylor says efforts to alleviate racism and unconscious biases in university departments shouldn’t fall on people of color alone.

“They should invest resources to educate White students, White faculty and White staff to understand where their biases are coming from, where their ignorance is,” Taylor says. “Because the assumption is that they are knowledgeable, nothing needs to be done and it’s for the people of color to make all of the adjustments. As long as we have this kind of one-way understanding, nothing is going to change, so why don’t we shift the bar and have the journey be two ways?”

For instance, Taylor wished for White people to understand that Black people engaging in close relationships to nature is not an anomaly. Brown Girls Climb, Diversify Outdoors, MLK Ski Weekend, Outdoor Afro — and Black families like hers who own cabins and summer homes — are just a few examples among others. Not to mention an extensive but often neglected canon of Black, nature writing exists.

However, both Gatheru and Taylor also stressed the need for people to consider how American history has barred people of color from participating in environmental movements and even outdoor recreation. For instance, Gatheru mentioned how Black and Brown bodies have often been criminalized in wilderness spaces, dating back from slavery to undocumented people working in fields today.

“We need to grapple with the fact that a lot of American environmental history was racist,” says Gatheru. “We need to take that history and understand how it has impacted generational understanding of environmental issues, protection and leadership. We need to understand that and use it as a pathway to create conversations.”

One way for White people to engage in those conversations, says Taylor, would be to attend conferences such as the 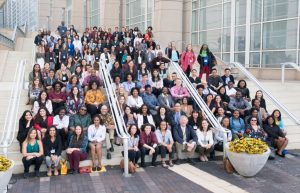 Attendees at the New Horizons in Conservation Conference held in Chicago last year.

annual HBCU Climate Change Consortium in New Orleans or the People of the Global Majority in Outdoors Nature and Environment — both predominantly minority conferences.

“The question then becomes, ‘Why aren’t other programs around the country recognizing that those programs exist and collaborating with them and recruiting and bringing folks graduating from those programs into the professoriate?’” asked Taylor.

This April in Ann Arbor, Michigan, Taylor will host her third annual New Horizons in Conservation Conference, dedicated to assessing the status of diversity, equity and inclusion within the conservation field.

By attending these conferences, she says employers and universities would no longer be able to fall back on the trite excuse that “minorities aren’t interested in the environment.” Instead, she says, they would see halls filled with hundreds of minority environmentalists who “exist, are here, aren’t going anywhere and are making an impact.”