Nearly eight months after Dr. Jack Thomas  resigned as president of Western Illinois University (WIU) he was selected on Friday to serve as the ninth president of Central State University—a historically Black university in Wilberforce, Ohio.

Thomas, a seasoned administrator who served at the helm of WIU for nearly after nearly a decade, was the target of a campaign by some Western Illinois University alumni who called for his ouster as head of the rural school. Some suspected that the efforts were racially motivated.

“I don’t let threats like that cause me to do things,” he told Diverse at the time. “I’m doing this on my own. The board did not ask me to. I just feel it’s time, time for new leadership.”

Mark Hatcher, chair of the Central State Board of Trustees said that Thomas emerged as the top candidate following a national search. 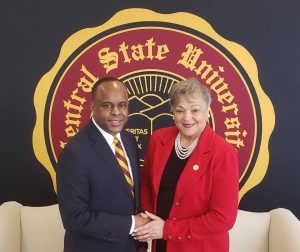 “Dr. Thomas was selected based on his proven ability to lead and grow institutions of higher learning with a focus on improving academics, student-oriented career preparation and institutional fundraising,” said Hatcher.

Thomas—who holds degrees from Indiana University of Pennsylvania, Virginia State and Alabama A&M— and is an expert on Black males in literature, will replace Dr. Cynthia Jackson-Hammond, who has lead the university since 2012. She is scheduled to step down in July.

“Central State University continues to progress and is among the region’s best institutions of higher education,” said Jackson-Hammond. “The University offers more than academic quality assurances. It supports families and communities that want to achieve an enhanced quality of life. Dr. Thomas will ensure that Central State University’s trajectory is focused and ambitious.”

At a press conference on Friday, Thomas said that the public HBCU school—founded in 1837—is in a position to remain competitive and grow.

Thomas, who is currently a senior fellow with the American Association of State Colleges and Universities, said that he was drawn to CSU because of its storied history and potential for growth.

Still, he will inherit some unique challenges, including a decline in student enrollment in recent years and continued calls by some for the university to consider merging with Wilberforce University, another HBCU, located across the street. Last year, the institutions announced that it would consolidate some of its operations, an effort to share fiscal resources.

Those who know Thomas and have followed his career trajectory said that his appointment to CSU is a major coup.

“Dr. Jack Thomas is exactly the kind of visionary leader that universities look for but don’t often find in their search for a new president,” said Dr. Adriel A. Hilton, Dean of Students and Diversity Officer at Seton Hill University. “Respected by his colleagues in higher education and admired by students, faculty and staff, Dr. Thomas has the kind of keen insight into the workings of college and university administration that allows him to the see the trees and the forest. He is both patient and knowledgeable and will undoubtedly take Central State University to even greater heights.”

Dr. Freeman A. Hrabowski III, president of the University of Maryland Baltimore County, hailed Thomas as a visionary.

“Central State University is very fortunate to have attracted one of the most admired thought leaders in American Higher Education to become its next president,” said Hrabowski. “Over the past three decades, Dr. Thomas has demonstrated both his strong leadership and his commitment to supporting students. The board has made a wise decision, and the students will be the beneficiaries.”

Following in the Footsteps of Her Father, Dr. Wilma Mishoe Led Delaware State to New Heights