Sociologist Examines Gendered Racism from the Perspective of Attorneys

A book by Dr. Tsedale M. Melaku explores the ways in which Black women face gender and racial discrimination when pursuing careers at elite law firms.

On Wednesday evening, the Center for the Study of Women and Society at the City University of New York (CUNY) Graduate Center hosted a book salon at which Melaku, a sociologist, discussed her book, You Don’t Look Like a Lawyer: Black Women and Systemic Gendered Racism. While the book focuses on attorneys, it presents issues all Black professional women navigate as they pursue careers that have traditionally been held by White men.

Melaku began by reading some crucial portions of her book, in which Black female attorneys describe their experiences trying to find mentors and sponsors in unwelcoming environments. They found it almost impossible to organically develop mentor or sponsor relationships with their firms’ White male partners. And they often found themselves shut out of networking and professional development opportunities. One attorney is quoted as saying the White male partners didn’t see Black female attorneys as bringing something of value to the firm.

After the reading, Melaku engaged in a conversation with Dr. Angie Beeman, associate professor of sociology at Baruch College. Melaku said that law firms have diversity pages on their websites, but when the actual numbers are examined, there are few attorneys of color. 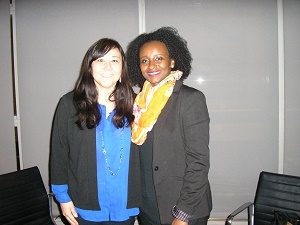 “It allows people to talk around the issue without really talking about the issue,” said Melaku. “Where are the Black and Brown people in positions of power within the organizations? When you look at actual numbers, we don’t exist.”

Beeman mentioned how the issues presented in the book transfer to other White-dominated spaces, noting she has witnessed it in academia as well. Just like in law firms, in academia, Black female professors are expected to perform “invisible labor,” such as mentoring, but it is not valued, she said.

“In academia, they’re expected to do all that mentorship, but it’s not rewarded,” she continued. “If you’re not doing it, why aren’t you? If you’re doing it, it doesn’t count.”

Melaku, who had considered attending law school before working as a paralegal in a high-profile law firm, said Black women in such firms are often seen as affirmative action hires and their many accomplishments trivialized. She worked as a paralegal for more than a decade while pursuing her doctorate and witnessed the systemic gendered racism firsthand.

Black female attorneys are simultaneously hyper-visible and invisible, which Melaku said she’s also seen in academia. Every action is scrutinized, but their successes are overlooked.

“Many of these women are double Ivies, have navigated White spaces, but now they’re affirmative action hires,” said Melaku. “It diminishes their accomplishments.”

Sponsorship is someone seeing the potential and championing an associate attorney, which can put them on the path to partnership. Black female attorneys rarely have sponsors, so their access to advancement is limited. The attorneys in the book said they had a hard time connecting with White partners. Black male attorneys sometimes have it somewhat easier, as they more readily form bonds with White male attorneys.

“People ask, ‘Why don’t you lean in?’” said Melaku. “You can’t lean in if you’re not in the room. Without sponsorship, access to advancement is impossible.”

Beeman noted that most diversity officers are people of color and it isn’t clear how much they ever engage with the partners. Until partners appreciate and take an active interest is diversity, both said, it won’t become a meaningful part of the firm culture.

In relation to critical race theory, Melaku said it’s instructive to look at an institution and how it is structured. White partners must be willing to have difficult conversations, feel uncomfortable and take steps forward. White male partners should be asked why a firm has no Black partners.

“How are we able to talk about diversity and inclusion if you can’t even have the conversation?” said Melaku. “There are people doing the discriminating, people who think Black women are incompetent.”

So, how can the playing field be leveled?

Melaku said people have to speak out about their own experiences and those they witness and have others believe them. She encouraged people in the audience, saying, “If you see something, say something.”

“You need to be uncomfortable and talk about discrimination,” she said.

Melaku described an experience she had in an elevator after teaching a class. At the time, she was eight months pregnant. An older White male faculty member who thought she was a student asked her why she was having a baby and told her she was ruining her life. She not only explained that she was faculty but said speaking to students in that way is discriminatory and unacceptable. She followed him off the elevator to his department and made a complaint about him.

Despite the challenges, Melaku encouraged Black women to go to law school, apply for jobs at elite law firms, speak up and document their experiences.

“I am an angry Black woman,” said Melaku, who has been invited to speak at law schools. “We have to make people uncomfortable. The only thing we can do in those moments is know we are not alone. I’m okay with getting angry. It’s difficult, but the majority of Black women and men are being pushed out of those spaces, so be angry.”