During the school’s Founders Day ceremonies, the president of Wake Forest University publicly apologized for the institution’s past involvement in slavery, reported The Associated Press. 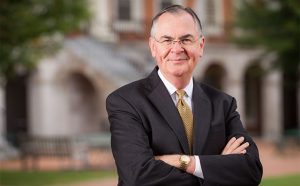 “It is important and overdue that, on behalf of Wake Forest University, I unequivocally apologize for participating in and benefiting from the institution of slavery,” president Nathan Hatch said. “I apologize for the exploitation and use of enslaved people – both those known and unknown – who helped create and build this university through no choice of their own.”

Though he did not comment on the matter, the apology comes after anonymous, racist emails were sent to some faculty members last year.

During the remarks, some students stood in a silent demonstration. Sophomore Sierra Deveaux told The Associated Press that though Hatch’s public apology resonated with her, there must be a plan of action too.

“They need to put action to their words,” Deveaux said. “Through policy on this campus, more transparency on how they go about condemning acts of White supremacy on this campus and making it clear that they do not support white supremacy and making clear through their actions that certain behavior is not OK and that certain behavior will have consequences, and actual, written-down consequences if this is to happen.”