One could argue it’s been a victorious year for historically Black colleges and universities (HBCUs). The FUTURE Act – legislation sustaining federal funding for minority serving institutions – made a fraught, winding journey to President Donald J. Trump’s desk, where it was signed into law in December.

“I cannot stand before you here today and say only that the state of HBCUs is strong or only that HBCUs remain resilient,” he said at the organization’s second annual “State of the HBCU Address” where HBCU leaders and allies gathered in Washington D.C. “As you know, those truths are only part of the story.” 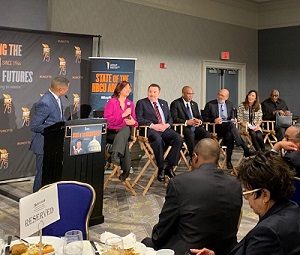 He argued that the permanent annual $255 million in federal funding for minority serving institutions, with $85 million designated for HBCUs, marks progress, but it isn’t enough to solve the “HBCU paradox” – the fact that HBCUs enjoy broad bipartisan support but continue to be “woefully underfunded.”

The support that exists, though it spans party divides, is “too often a mile wide and an inch deep,” Lomax said. “Too often it creates an all too convenient gap between rhetoric and reality. It makes it easy for people to look and sound like they are HBCU boosters without having to take the hard steps and make a deep-seated commitment to eradicate decades of disparate treatment of HBCUs.”

He directed a few pointed comments at Trump, who claimed at the Davos economic conference in January that his administration “saved” HBCUs .

“We know the president wants the bragging rights for having done ‘more than any other president’ to support HBCUs, so there’s still time for you to claim that mantle,” he said, addressing the president and prompting laughs from the audience. “We hope you will propose in the coming months investments that rival or exceed those of your Democratic opponents.”

Lomax laid out several ongoing policy goals like lobbying for a $1 billion grant for HBCU infrastructure, doubling the Pell grant and tripling Title III funding, the funds guaranteed in the FUTURE Act.

But the federal government isn’t the only sector responsible for the inequitable funding of HBCUs, he said, pointing to “subtler forms of disparate and unfair treatment” by philanthropists, accreditors, corporations and lenders.

“Let’s make this year the year inequitable treatment of HBCUs is named and shamed,” he said.

While Lomax brought the obstacles facing HBCUs into sharp focus, the event also had celebratory moments, including remarks from Rep. Mark Walker, who spoke about the bipartisan collaboration in Congress that enabled the FUTURE Act to pass, highlighting his work with Rep. Alma Adams.

As a Republican representing North Carolina, Walker said he wanted to show people that “you can come to Congress and you can still have an ‘R’ by your name and you can still impact the communities you represent in hopefully a very successful way.”

In a concluding panel, representatives from all of these categories of institutions expressed hope that their joint advocacy for the FUTURE Act would spark future teamwork on behalf of other policies.

For example, Rita Pin Ahrens, executive director of OCA-Asian Pacific American Advocates, expressed her intention to work with other leaders in the room on the reauthorization of the Higher Education Act, the primary law governing federal higher education programs.

Dr. Antonio Flores, president and CEO of the Hispanic Association of Colleges and Universities, highlighted the Hispanic Educational Resources and Empowerment (HERE) Act, which would create a new $150 million grant program under the Higher Education Act to improve college access in Hispanic communities. He sees it as another potential opportunity for minority serving institutions to support each other in the “evolution of our joint effort.”