When Inhumanity ‘Trumps’ a Fundamental Basic Need to Live and Learn

Have you ever been so hungry that you could not concentrate on school and work? How long and how often did you go without one or more meals? What stopped you from having breakfast, lunch, and/or dinner?

As I write this, I am eating breakfast and am aware that I am privileged doing so in this so-called land of plenty. I also feel a sense of guilt knowing that millions of children live in food insecure homes where eating a meal is an inconsistent luxury. They reside in food deserts and attend schools where breakfast and lunch are being threatened and ‘trumped’ due to the almighty unjust dollar and increasing disregard for the needs of our most vulnerable population: children.

Since the National School Lunch Program (NSLP), the first permanent program of its kind, was created in 1946, the system has never served each child equally. Years of segregation means that students of color at underfunded schools are underfed. By 1963, according to Levine’s School Lunch Politics, the NSLP reached only 26% of children of color in Alabama, Georgia, Mississippi, and Virginia. These are primarily southern states; let’s not ignore northern states and those in other regions. Food must never be political. #Never

In addition to recognizing the NSLP, the Black Panthers must be honored for their humane efforts to feed children. The Free Breakfast for School Children began in 1969 at an Episcopal church in Oakland, California and went from feeding a handful of children to hundreds. Black Panther Party members and volunteers went to local grocery stores to solicit donations, consulted with nutritionists on healthy breakfast options for children, and prepared and served the food free of charge. Ultimately, the Black Panther’s Free Breakfast Program spotlighted the limited scope of the National School Breakfast Program, and played a significant role in pressuring Congress to authorize the expansion of the School Breakfast Program to all public schools in 1975.

Students can qualify for school lunch, depending on their household income. The income qualification is based on the outdated federal poverty line – a flat rate across the 48 contiguous states that fails to account for variable costs of living. This leaves many families—especially those living in high-cost cities—struggling to pay. In the 2019-2020 school year, for example, a child in a single-parent home qualifies for free meals only if their parent or guardian makes less than $22,000 a year. So much for the U.S. being such a wealthy  and developed nation. 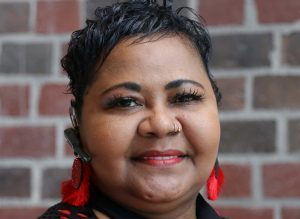 What comes to mind when you read and/or hear the word ‘desert’? I think of cactus, sand, extreme heat, food challenges, and paucity of water. Now add the word ‘food’ as a qualifier. I am a witness, having resided in Cleveland and East Cleveland, Ohio. The USDA (U.S. Department of Agricultural) sought guidance from the Committee on National Statistics (CNSTAT) of the National Academies on the use of the word “hunger” in connection with food insecurity. The independent panel of experts convened by CNSTAT concluded that in official statistics, resource-constrained hunger (i.e., physiological hunger resulting from food insecurity) “…should refer to a potential consequence of food insecurity that, because of prolonged, involuntary lack of food, results in discomfort, illness, weakness, or pain that goes beyond the usual uneasy sensation.”

Far too many families live  in food deserts – low income communities, more than a mile from a grocery store, and many do not have a car. Many grocery stores do not accept food stamps (#sigh). Estimates indicate about 25 million families are trapped in food deserts; a disproportionate percentage are families of color — Black and Hispanic – in both urban and rural communities. Their mental and physical health are compromised based on food insecurity and/or access to unhealthy food options that are affordable. When hungry, any food is better than no food. Some policy makers appear to be clueless or uncaring about this. Where’s the humanity, I ask rhetorically? #absent.

When policy leaders  make such irresponsible decisions about feeding children, I can’t help but challenge them about lack of support for children in homeless situations. In this wealthy nation, homelessness is exploding at epidemic rates. A record-high 1.5 million students were homeless during the 2017-2018 school year, which is 11% more than the previous year and almost double the number a decade ago.

To state the obvious, with a lack of stable housing comes food insecurity – hunger and maybe even starvation – on top of other trauma – emotional, social, health, and academic. As Donald Trump and others banter about the efficacy of SNAP (Supplemental Nutrition Assistance Program), I cringe thinking about the gourmet meals they eat and/or the hundreds of dollars  they spend on meals while children are hungry, starving and being penalized. Where is the humanity for our very vulnerable children? Derelict legislation and benign neglect come to mind.

I cannot help but think of the years when I was on SNAP and then ‘progressed’ to the working poor after earning my undergraduate degree. I was a telemarketer making around $14k as a single mother with one son. The working poor are people who spend at least a half year (27 weeks) in the labor force but whose incomes still fall below the poverty level. Race and ethnicity cannot be ignored. Blacks and Hispanics are about twice as likely as Whites and Asians to be among the working poor. In 2016, the working-poor rates of Blacks and Hispanics were 8.7% and 8.5%, respectively, compared with 4.3% for Whites and 3.5% for Asians. My first professional job convinced me that I had to return to college for a higher degree and better life.  We were hungry, rent was too expensive; and I could not afford a car, and more. My dream of vacations for loved ones, educational materials and academic summer programs for my son, and quality health care were not an option. #DreamsDenied

Those who make such policies beg the question of whether they have ever gone hungry; I mean really hungry. Do they think of the implications of their inhumane policies when it comes to their own children, family members, and friends? I suspect not. While my stomach is full, my heart is craving for change. Our children are waiting for their next meal, consistent meals, and adults in powerful positions to care in this nation of plenty.

Pence, not Trump, to Give Notre Dame Commencement Address