How One Professor is ‘Leveling the Playing Field’ For Business Students

Growing up in the Morrisania neighborhood in the South Bronx, Rehva D. Jones always saw the value of education as the great equalizer for underserved communities.

“I could see the difference that education made. It determined which side of the customer service window you ended up on — as a service provider or a service recipient,” says Jones, who is director of the MBA program in the School of Business and Graduate Studies at Trinity Washington University, a Catholic college located in the nation’s capital.

“Education levels the playing field in a permanent way.” 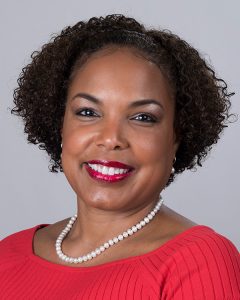 Now Jones, who cut her teeth in the non-profit and government sectors before transitioning to academia, is actively working to ensure that adult students — particularly women — have access to a high quality graduate education so that they too can be competitive in the workforce.

“Growing up in one of the poorest neighborhoods in the South Bronx, I was fortunate enough to have teachers who were caring and passionate,” says Jones, adding that she remains in touch with her pre-kindergarten teacher, Evelyn Tapp. “My teachers instilled in me a love for education, they gave me the confidence that I was academically versatile. They believed in me, which made me believe in myself. I have never shied away from an academic goal or challenge.”

After high school, Jones says she was lost and unsure about her next steps. Still, her parents knew the importance of a college education and encouraged her to pursue college, despite not going themselves.

She worked to earn her undergraduate degree over a 10-year span, finishing at Mercy College while balancing work and family. After graduation, Jones was drawn toward the non-profit and youth development sector, holding prominent positions in both New York and later in Washington, D.C.

“Non-profits taught me that you have to be very creative in order to get things done because resources are scarce,” she says.

Years later, Jones made the career switch into government, where she worked as a project manager and eventually rose through the ranks to become director for the D.C. Tuition Assistance Grant (DCTAG) program within the Office of the State Superintendent of Education.  Later, Jones decided to head back to school to earn her master’s degree in business administration from Johns Hopkins University.

“I had to pinch myself a little bit when I first got there and settle into the fact that I belonged there,” she remembers, saying that she found that pursuing business was a natural progression from her previous work experience.

“What industry do you know that doesn’t have a side of business to it?” she asks matter-of-factly. “So business is a lifeline, it gives structure to anything you’re doing. It is one of the most flexible degrees that one can get.”

A whiz when it comes to numbers and data, Jones became interested in researching and disaggregating graduation rates. It was through this process that she realized that she wanted to be closer to students.

She started teaching statistics and macroeconomics as an adjunct at the University of the District of Columbia and became hooked on working with students in the classroom.

“It is indescribable when you are watching students struggling with a concept and then suddenly you see the light come on,” she says. “Learning has a curve, you see students’ wheels turning, learning occurs and then students gain the confidence needed to fearlessly move forward. It’s beautiful to watch.”

After teaching as an adjunct professor in Trinity Washington University’s business program, Jones was hired in 2018 to teach and direct the MBA and undergraduate business programs, which has turned out a successful group of alums.

“The depth of the work is amazing  — I love being in the classroom guiding students‘ learning experiences but also having a more systemic impact by ensuring the MBA and undergraduate programs in business are of the highest academic and professional quality,” she says, adding that she has found joy and purpose in her new career.

“Working at Trinity with its students is all that I thought it would be and more,” says Jones. “This is the first time that I have been on a job that gives back to me so deeply. The work and students feed my soul in many meaningful ways.”

As a woman of color, Jones says that she wants her professional experiences in various sectors to help her students think broader about their career options and provide them with a solid foundation in business as well as sharply increase their confidence levels.

“I want to be known as someone who is innovative, grounded and super passionate about students of color, specifically women of color, who are also the most underserved and overwhelmed in higher education,” she says. “I want students to remember their learning experience in my course as that pivotal touch point in their lives.”