Hundreds of students, educators and policymakers flocked to a three-day summit in Tampa, Florida, over the weekend to focus on how best to empower Black and Latino men in college.

Now, in its fourteenth year, the Black Brown & College Bound (BBCB) summit — sponsored by Hillsborough Community College — continues to be one of the nation’s largest convenings that highlights the challenges African American and Latino male college students continue to face. More than 5,000 students have participated in the annual summit since it first launched in 2006.

Over the last decade and a half, the summit has emerged as the preeminent forum to address the unique barriers facing minority males when it comes to academic success, said Dr. Ken Atwater, president of Hillsborough Community College.

“You flower where you are planted,” said Williams, author of Eyes on the Prize, My Soul Looks Back In Wonder and a 1998 biography of the late U.S. Supreme Court Justice Thurgood Marshall. “Make the best of a situation so you position yourself for future opportunities. You will then have exceeded the limitations people have tried to put on you.” 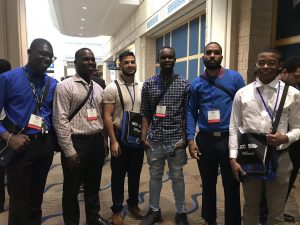 Williams told the attendees that much progress has been made in the fight for civil rights over the past few decades but urged the young men to continue to push for social change.

“Yes, you can be like Dr. King,” he said, referring to the iconic civil rights leader who was gunned down on a motel balcony in Memphis in the spring of 1968. “Education and activism leads to things that people didn’t think was possible a generation ago. You can make a difference in your age.”

Wood, who is the associate vice president for faculty diversity and inclusion and a professor of education at SDSU was presented with the Distinguished Faculty Award by the BBCB organizers along with Harris, who is also a professor at SDSU.

“Black lives and Black minds are intertwined,” said Wood, who added that when people of color — Blacks in particular — don’t represent a particular stereotype, their Blackness is often called into question. “People will often times build you up by tearing down your community,” he added.

Over the three-day gathering, a variety of topics were explored including mentorship and strategies for retention and success for young men of color.

“The whole summit was established to spark a conversation and to look at solutions surrounding African American and Latino male college going and completion rates,” said Atwater in an interview with Diverse. “We like to say that we are the preeminent minority male program in the country, not only in the two-year colleges, but in the nation as a whole.”

Atwater said that in order to achieve success with minority males, institutions have to provide robust resources and support for these students. At HCC, he’s established a cohort-based program to help minority males be successful. The completion rate of Hope Scholars at HCC hovers at about 80%.

“We incorporate some of the same things we are learning from our summit into our Hope Scholars program like faculty mentors, study groups, self-esteem, working on educational plans,” said Atwater, who has become the summit’s chief ambassador and remains encouraged by the progress that has been made in recent years. “The ideal goal of the summit is to one day not need the summit.”