Why Tonya Butler Gave Up the Courtroom for the Classroom

As a self-described “starving actress” and someone who grew up in Los Angeles, pursuing the film and television industry was an obvious choice for Tonya Butler.

She decided to take her interest in the entertainment industry one step further and pursued a law degree. On the first day of law school at California Western School of Law, Butler passed out business cards that read, “future entertainment attorney.”

Over the span of 14 years, Butler worked as an entertainment attorney in-house for record and publishing companies as well as film studios including Rhino Records, Global Disc Records, Pioneer Entertainment and MGM Music. Simultaneously, she taught part-time. 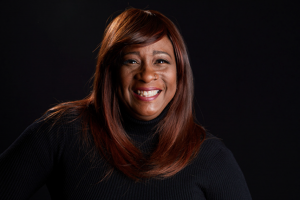 Butler described her experience working in entertainment law as having its “ups and downs” due to the competitive nature of the industry. She found herself enjoying working with companies rather than individuals and artists.

“It was hard to give advice that people paid you to give them but they didn’t always take,” says Butler, who was recently appointed chair of the music business and management department at Berklee College of Music.  “And then they come back to you and pay you more to get them out of the trouble that you tried to get them out of originally. And that just became really frustrating.”

She was also bothered by the number of people who needed legal help in the music industry but could not afford it.

Butler eventually switched over to academia full-time, as she served as the coordinator of music business at the University of Memphis. She went on to work at Minnesota State University at Mankato, where she directed the music industry studies program.

She says teaching gives her the opportunity to combine both her industry and acting experiences.

“I feel like when I’m in front of 45-50 students, I am on stage,” says Butler. “Part of my job is to keep them engaged, keep them from falling asleep or from playing on their phones. So, I do the best I can to make sure that they have an engaging experience in the classroom.”

Butler pursued acting until 2015, as she often participated in community theater and school productions. Her last performance, the 1931 rendition of Frankenstein at Minnesota State, was her favorite.

After running the music business program at Minnesota State, Butler was recruited for an assistant chair position at Berklee in 2017.

In December, she was named chair at Berklee and plans to begin her role in August 2020.

“I’m looking forward to bringing a fresh take or fresh outlook to the program and really inspiring both the faculty and students and doing my best to make sure it is the number one music business program in the country, if not the world,” says Butler.

Butler became the first woman and first African American to fill the position and said that it is important for the music industry as well as academia to reflect its audience.

“When you see someone who looks like you in a role that you aspire to, it gives you even more motivation and inspiration that you can do it as well,” she adds. “So that’s one of the reasons why it means so much to me.”

As part of her goals as chair, Butler hopes to ensure that the program keeps up with the constant changes of the industry.

“More than anything else, I want to make sure our students are prepared for the changing industry,” she says. “They just need to be aware that the industry is changing every single day and [know] how to function in such a sporadic environment.”

Additionally, Butler wants to require each student to take a legal education and/or business education course.

Butler describes her time at Berklee as the highlight of her career.

“Berklee is a perfect fit for me,” she says. “I fit and we fit like a glove and it’s a place where I can really see myself learning more and growing. I’m a part of the Berklee family and I feel so connected here.”

Although she no longer sees herself going back to law, she still attends law conferences in order to stay up to date on practices to share with her students.

“As far as being a lawyer again, I don’t have a desire to do it and I feel like I am better served personally by teaching law rather than practicing it,” says Butler.