The combination of a coronavirus-halted economy, an upcoming election and an ever-mounting student debt crisis has thrust the topic of student loan forgiveness to the forefront of the national conversation in recent weeks.

But just who — and who doesn’t —  support student loan forgiveness? The answer may not be as bipartisan as previously assumed, suggests a study published by College Finance, which surveyed more than 1,100 Americans across party affiliations, ages and debt status.

When asked the general question, ‘Would you support a student loan forgiveness program?’ opinions typically fell along party lines, with 84% of Democratic respondents expressing some degree of support as opposed to 50% of Republicans reporting similar support.

However, with regard to the thornier facets of student loan forgiveness — its ethics, its feasibility and the specific policies of it —  party lines became more blurred, says John Bernasconi, a project manager 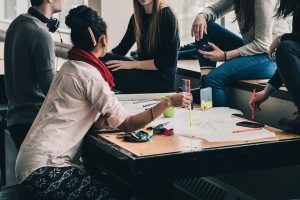 “We were pleasantly surprised to uncover the extent to which our participants’ beliefs and preferences defied strict party lines, as well as their willingness to acknowledge points that contradict or challenge the position on student loan forgiveness that we support,” wrote Bernasconi in an email to Diverse.

He said that because student debt relief is often spoken of in “all or nothing” and “good and bad” terms, the objective of the study was “to dig deeper.”

Additionally, the study also asked respondents how realistic they felt each policy plan was, revealing stark differences between support and perceived feasibility among Democrats. For instance, although 80% of Democrats supported complete forgiveness, only 34% felt it was realistic. Alternatively, when presented with an “income-based, month-by-month payment forgiveness” plan, perceived feasibility among Democrats skyrocketed to 76%.

Interestingly, regardless of party affiliation, those with student debt were more likely to view the forgiveness plans as realistic, causing the authors to question whether “optimism about political change” is a common coping strategy for living under the weight of debt.

The study also raised questions of ethics and fairness, such as, “Is loan forgiveness fair to those who had made cost-conscious education choices?” Such questions have inspired heated debate. On this issue, the authors found bipartisan lines forming again, with 75% of Republicans and 46% of Democrats saying forgiveness would be unfair to those who made cost-conscious choices.

However, when asked whether offering large loans to teenagers fresh out of high school was exploitative, the margin of difference between parties shrunk again, with 67% of Democrats and 55% of Republicans answering “yes.”

Additionally, both parties’ supporters, for a total of 83% overall, appeared to especially agree on one thing: that student debt impacts the quality of life for young adults, preventing them from reaching milestones in life, such as marriage or children.

“Political issues such as student loan forgiveness are complicated and nuanced, and we were delighted to see these qualities reflected in the responses of our participants,” said Bernasconi. “Many people across the political spectrum demonstrated knowledge, consideration and understanding of the underlying aspects of student loan forgiveness.”

Meanwhile, one author of the study said support for student loan forgiveness will likely gain more traction as the coronavirus spreads throughout the U.S. and has a significant financial toll on millions of Americans. The study was conducted shortly before the coronavirus began to emerge as a worldwide threat.

“If I had to speculate, I’d say the coronavirus is likely to make most categories of respondents more supportive of student loan forgiveness provisions than they were prior to the onset of the crisis,” said Kristyn Pilgrim in an email to Diverse. “There is a general understanding that COVID-19 will result in sudden, high unemployment rates that are likely to impact younger workers who are more likely to hold student loan debt. At the moment, the public is generally supportive of broad government intervention to financially support broad segments of the population, especially the most vulnerable.”

Diversity in the DACA Numbers—Undocumented Whites